Back in last: Tragedy of Nevada education Mississippi takes 49th while Nevada scrapes the bottom 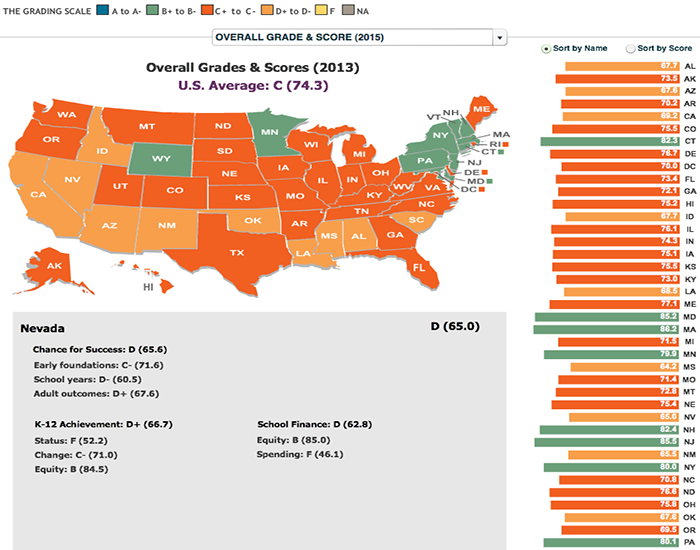 Once again, the latest report by Education Week shows that Nevada, the Silver State, is having trouble even finding out the the chemical symbol for silver (Ag, to save anyone the Google search).

As a student at one of the top ten performing schools in Las Vegas, finding out that your state is performing so poorly in education comes as a shock, considering the graduation rate at SWCTA is virtually 100%, while Nevada’s overall rate barely clocks in at 70%. One may not realize that the problem of failing to graduate is that widespread when they hardly interact with students who have, or ever will, drop out.

Even students who end up graduating have to live with being labeled as a student coming from the state with the worst education system in the country, which may cause a negative impact on that student’s future. With these academic statistics, how could a well-known company see a Nevada graduate as a beneficial member to their corporation?

As a student who actually cares about his education, this news troubles me on a personal level. Achieving anything regarded as “stellar” in Nevada does not carry as much weight as achieving the same type of reward in another state (such as Massachusetts or Vermont), and the only way to currently fix this problem is to move to a state with better education. The solution is obviously ridiculous, and becomes a boon on anyone who was unfortunate enough to be born into the great state of Nevada.

With enough help from state lawmakers and the national government, the state may become a powerhouse in education given enough time.

In addition to the location issue, many external influences also factor into poor academic reports. A lack of motivation, a poor educational environment and failure to complete graduation requirements results in academic failure that creates long term issues for many students.

The lack of motivation currently plaguing many Nevada scholars is not a problem that can only be pinned on the student population, however. Teachers play a large role in the lives of the student body, and when those responsible for educating the youth are themselves unmotivated (due to low pay and a high-stress environment), academic failure is not an unlikely outcome.

Teacher salaries are not the only pitfalls stemming from low education budgets, either, with the entire Nevada education system being severely underfunded compared to the national average. Up until 2015 (when state lawmakers increased school funding by $400 million), Nevada was shown to spend a record low amount of money on pupils in the school system, ranking 48th in the country according to a report by the Reno Gazette-Journal.

However, saying that Nevada is not attempting to improve their education rating would be a blatant lie. In fact, a bill that has been approved (but is yet to implemented due to a lawsuit claiming that public school money is being used to fund private, religious school tuition) known informally as the “voucher system” (and formally as Senate Bill 302),  would allow low-income students to spend pre-approved state money on costs such as textbooks, tuition and test-fees.

Another step in the right direction for Nevada education was the creation of new magnet programs across the Clark County School District. This action allows students to leave under-performing school campuses near their residence in favor of attending older schools that introduced the new magnet programs.

Demand for magnet schools has been on the rise in recent years, yet available seating for the 2014-2015 school year was capped at around 6,000 incoming students, with over 16,000 students vying for those positions. Creating and funding new magnet programs are a necessity for the state of Nevada, as such schools are thriving and allowing students to choose what they want to hone in on once high school is over.

The road to recovery will take a long time considering how far behind Nevada is in education, yet with enough help from state lawmakers and the national government, the state may become a powerhouse in education given enough time (and money).