Unwitting conservatives for Biden On vaccines, abortion, Republicans are ceding the center to the left 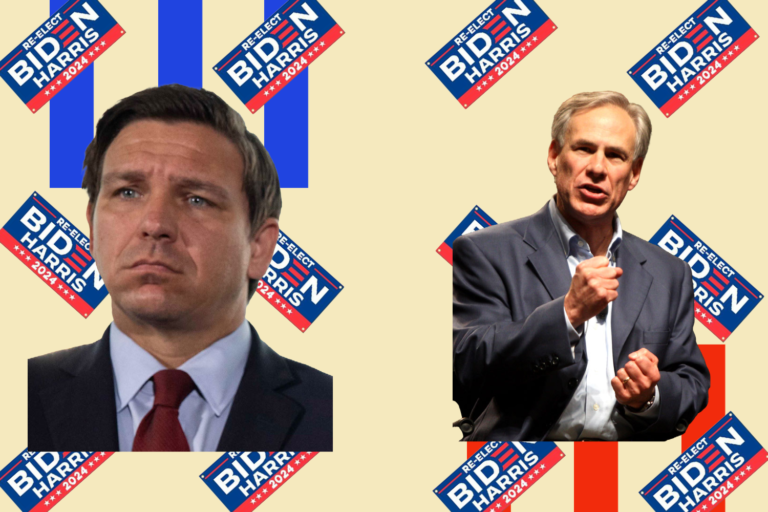 Given Joe Biden’s victory last year, it would seem like obvious advice for GOP politicians to try courting more moderate voters. Their largest politicians’ latest moves on vaccinations and abortions, however, makes it apparent they’re not following that advice, and have turned themselves into human advertisements for the 2024 Biden campaign. Photo Credit: The Trump White House. Photo Credit: Gage Skidmore Art Credit: Ahmed Ahmed

I’ve admittedly borrowed this headline from The New York Times’ resident conservative writer Bret Stephens. The columnist – a hardcore right-winger who lent his support to Democrats in the Trump years – expressed an ominous warning to his liberal friends: leftists, who were at that time infamously destroying private property, harassing political enemies, and tearing down status were handing a lifeline to a flailing then-President Trump. People can argue about whether these events had an actual impact – Biden did win, after all. But it’s difficult to find an argument against the underlying point: often, the most reliable political allies are the political enemies getting in their own way. And in the past couple of months, conservatives seem to have forgotten this lesson; on two key issues, Republican politicians have detached themselves from the vast majority of the country, and in doing so, have empowered the president.

For one, growing right-wing conspiracism has compelled GOP politicians to stake out ludicrous anti-vaccine positions. Major Republican senators want to help service members evade the military vaccine mandate, right-wing superstar Marjorie Taylor Greene (R-Ga) has compared Biden’s vaccine mandate to Nazism, and several states have banned businesses from enforcing vaccine mandates on their own employees. All of this is in spite of the overwhelming support the Biden vaccine mandate has from voters.

Arguably the largest face of the anti-vaccine right is Florida’s Governor Ron DeSantis (R-Fl), a frontrunner for the 2024 GOP presidential nomination. DeSantis has enjoyed heaps of praise from other news outlets like Politico for his handling of his state’s COVID-19 pandemic, but his average performance over 2020 grew nightmarish this year with deaths spiraling out of control. His big move this past month has been to fine counties in the state for every public sector employee they compel to get vaccinated – likely the most explicitly anti-vaccine move a major Republican executive has made since they came out.

There is no actual coherent justification for this. Everyone knew that employers had the authority to ask employees for their vaccination records until this year. And discouraging vaccines as deaths increase is the equivalent of pouring lighter fluid on a man on fire. No serious principle is at risk by requiring a vaccine for public employees, unless you believe vaccines don’t work: which DeSantis claims to not believe. These laws make the GOP’s brand explicitly anti-vaccine, making it politically toxic among voters.

The other area where Biden is being inadvertently empowered by Republicans is abortion. The nearly half-century where the Supreme Court prevented abortion bans allowed Republicans to appeal to religious conservatives, and the party still has enduring advantages on the issue: the vast majority of Americans back at least some sort of restrictions on abortion. The newly mainstream Democratic position on allowing federal funding for abortion procedures is also unpopular among most voters. Nevertheless, the new hard-right marjority on the Supreme Court has opened the door for near-total abortion bans, like the one signed into law by Texas Governor Greg Abbott (R-Tx).

While much conservative anger at abortions is directed at those after the irst three months the Texas ban includes virtually all abortions following the 6th week, including incest and rape. It’s true that most Americans favor some restrictions on abortion, but few are fans of laws that force 12-year-olds rape victims to carry babies to term.

Americans are broadly in favor of keeping abortion legal in the first trimester and broadly in favor of keeping it illegal following. They generally oppose restrictions for victims of rape and incest and generally support restrictions forcing children who seek abortions to notify their parents. Abortion battles from proponents and opponents have left in tact a status quo most Americans are content with. Now, though, Republicans like our state’s Dean Heller are backing politically poisonous restrictions.

It’s not impossible to imagine these two gambits paying off for Republicans. Maybe Americans are far less sympathetic to vaccines and abortions than polling suggests. Maybe the political terrain changes in the next few years, and the political costs of endorsing mandated vaccines and legal abortion outweigh the benefits.

However, I like to imagine a different hypothetical is far likelier: imagine being a middle-aged white working class voter in suburban Wisconsin or Michigan in 2024. You voted for President Biden four years earlier, and voted for President Trump four years before that. These people are important politically. They have a lot of power in the midwest (Wisconsin, Iowa, Michigan). The GOP does well with them when they emphasize their opposition to refugees, immigration, and affirmative action. However, they are also not especially religious, so they generally oppose, for example, total abortion bans. It’s easy to imagine these people reluctantly voting to re-elect President Biden, remembering Republicans’ shift right on abortion.

Think this is a stretch? Think again. World-renowned elections expert Dave Wasserman explained that much of Trump’s 2016 victory was reliant upon these voters: irreligious former Democrats who may dislike immigration, but are not conventional conservatives. They’re repulsed at the idea of abortion bans. Most voters – including many moderates willing to vote for Republicans – back policies like Biden’s vaccine mandate, too.

Predicting who will win the 2022 and 2024 elections so early is a fool’s errand. When faced with an opportunity to make Biden a one-term president, however, many Republicans are keeping their eyes on moral purity rather than winning. Not that I’m complaining, or anything.