Can’t stand the heat, don’t stay in the . . . music festival? A heated look behind the scenes of summer concerts 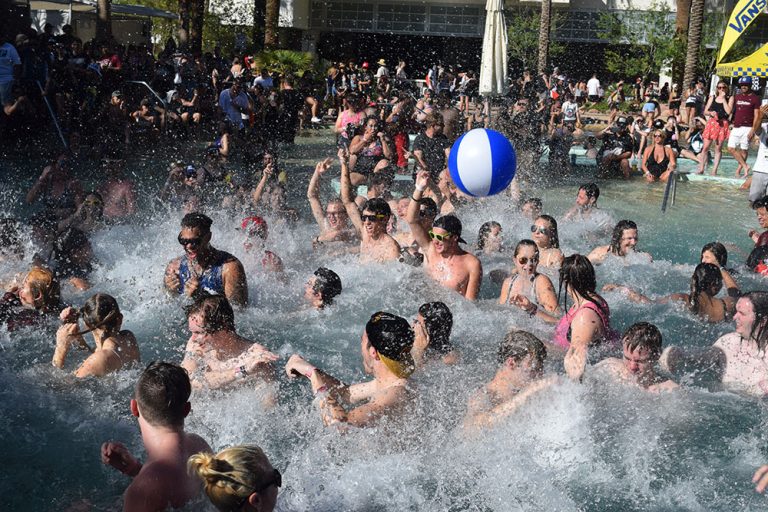 Her faded band t-shirt is covered in sweat and her face is burned from the sun. Two men each have one of her arms over their shoulders as they find their way to the emergency area of rock music festival Warped Tour. When they get her inside, cool air embraces her and the thudding bass of drums subsides. Medic JD Rosenthal is the first to approach and find out what’s happening.

His verdict? The leading cause of weather related deaths from 2000 to 2009: extreme heat exposure.

“The most common emergencies are going to be heat related emergencies–especially here in town, just because most of the festivals are in the middle of summer when everyone’s off [work],” Rosenthal said.

Many attendees of Warped Tour and other festivals understand the real threat of weather related injuries such as heat stroke and heat stress. However, the allure of popular artists such as Sleeping With Sirens and Waka Flocka Flame is enough to make the event worth it–even for those who have witnessed the serious effects of the Vegas heat first hand, like 18-year-old Karoi Burrell.

“My friend was in the bathroom and she passed out because it was so hot,” Burrell said. “We were looking for her when someone said they thought she went into the restroom, so we had to bust open the door and found her laid out on the ground.”

At music festivals like this (Life is Beautiful, iHeartRadio and Electric Daisy Carnival), thousands of people pay to see their favorite artists in the heat of summer. While prepping their outfits and packing snacks to hold them over during their favorite band’s set, most seasoned concert goers know to also throw in sunscreen and a few bottles of water.

“We live in Las Vegas, so you know to be drinking water all day,” Erin Wiegand, mother of a 14-year-old attending Warped Tour, said. “Number one thing: drink lots of water.”

Though it is her first time at Warped Tour, 16-year-old Olivia Miller also knows the threat of heat exhaustion. She previously attended iHeart Radio Daytime Village where there were no pools to cool off in, like at the Warped Tour venue.

“They need to have cool off stations or people will faint,” Miller said. “This festival is a lot bigger and crazier than iHeartRadio. It’d be better if these festivals were in spring or fall, because it’s way too hot for people.”

Another contributor to the probability of heat exhaustion at these events is the focus on profits, which tends to inflate prices for essential items such as water. Forgetting to hydrate could be deadly, and the rising temperatures leave one with little choice but to shell out $7 for a 20 ounce bottle of water.

“The sad thing is, everyone’s here to make money, so they’re generally going to charge for water,” Rosenthal said. “But they could raise the ticket prices a little bit and make water more readily available or free, and it would end up doing everyone a favor. There is some free water here but not a lot of people know about it and don’t know where it’s at.”

Indeed, when Hard Rock employees were asked why the pricing for water seemed to be inflated, they simply offered a smaller size for $3–failing to mention that there was free water at the event. Additionally, there were no signs around the Warped Tour venue mentioning the free water–unless one was to walk right by the water station or scroll through the festival website’s lengthy FAQ, an attendee would be none the wiser to this amenity.

“We went to Warped Tour in San Diego last year and there were only two places that sold water,” Wiegand said. “It was much worse there. I would suggest having more water kiosks throughout the event.”

If an attendee isn’t able to grab a bottle of water and ends up having a heat injury, access to medical professionals and quick treatment is usually available. However, attendees still suffer from the weather conditions in minor and major ways–with a few needing to head to the emergency room.

“We’ve been here for four hours and we’ve already seen about 30 people,” Rosenthal said. “There’ll be an average of four transports to the hospital, but it’s usually quick-fix stuff where we can just send them on their way after getting them into a cool environment with water. Today it’ll probably be close to 100 people we see because there’s about 10,000 people here.”

While many suggest that these festivals should be moved to a cooler time of year and more should be done to help prevent heat related emergencies in general, the factors affecting the problem are not easily fixed.

INFOGRAPHIC: Religion’s impact on teens What impact does religion have on teen's lives

“The best thing that they could do is have it during a different time of year,” Rosenthal said. “But it’s tough because if you do it during the winter, people aren’t on break and you’re not going to get as many sales–so it’s hard.”

However, music festivals during cooler times of the year are not unheard of. One of the most popular winter music festivals in the United States is the SnowGlobe Music Festival; held in December this year, the event takes place around a ski resort in South Lake Tahoe, CA. Changing a concert’s setting is not foolproof, however, and emergencies can still occur.

“We understand that an outdoor winter festival introduces a host of additional safety issues that our staff must be mindful of,” the event’s website FAQ reads. “For the entirety of the festival, we have support from the South Lake Tahoe Police Department as well as hired security and health care professionals.”

SnowGlobe is also a stationary music festival, which has the luxury of being able to rely on certain weather conditions and a single venue. Traveling festivals such as Warped Tour are subject to price inflation and changing environments, like in Vegas.

“It’s 110 degrees outside and they do [the festival] on the asphalt which radiates the heat up,” Rosenthal said. “And people are in really close proximity, so all of a sudden there’s body heat and they’re not drinking enough water. All of this stuff inadvertently dehydrates you.”

Hot or not, people gather at these events for one reason–to enjoy music and have a unique experience in what should be a lively, safe environment. While the solution to a safer music festival is not necessarily straightforward, simple things such as clearly advertising free water and easy access to cooling stations could reduce the number of heat related injuries at summer music festivals.

And whether or not any changes are made, hip hop heads and punk rockers alike will continue to flock to these events simply for their shared love of music.

“If it wasn’t worth it, I wouldn’t be out here sweating my butt off,” Burrell said. “It’s definitely worth it.”