BREAKING NEWS: Professional Academy wins annual football game Issues with field cause all students to sit on one side 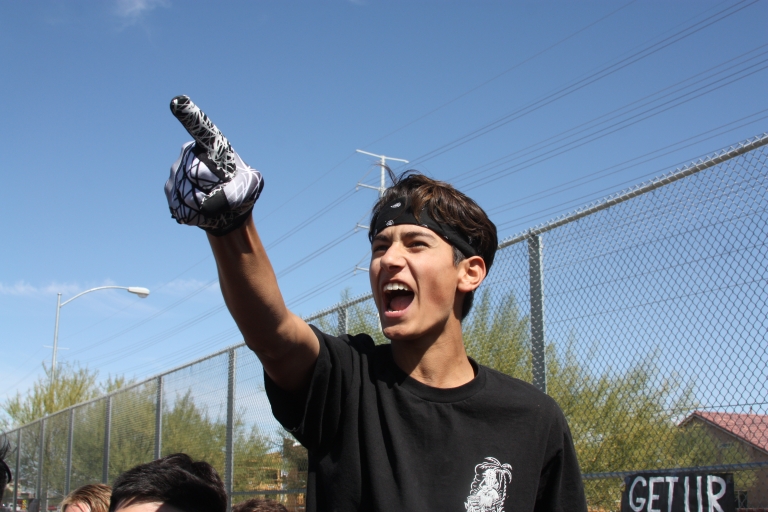 Cheering on the PA team, senior Joey Perez prepares everyone for the second half. PA won the annual homecoming game this year. “I think the best part of the game was during the middle because we really got together and worked as a unit,” Perez said. “Just like the sign in the quad says, we came, we saw, we conquered.” Photo Credit: Grinesa Bajrami

After an issue with the field, the Professional Academy defeated the Design Academy during the annual Homecoming football game.

“I was honestly surprised and worried that it may get too crowded, but once everyone was on one side, it wasn’t actually [that] bad,” senior Samer Youssouf said. “It was nice because when announcements or performances happened, we could all see it since we’re facing the same direction.”

“I personally don’t take it as a loss, but as a learning experience,” DA captain Chad Falvey said. “Even though this is my last year, I had the opportunity to influence and teach the underclassmen, so that they can be prepared for years of the game to come. I feel the underclassmen finally got an understanding of the game and what it means to represent DA, so I truly believe if they want to win, they will win.”

This year, Poly club performed first during the half-time show, followed by K-POP club. Also during half-time, the annual Homecoming court games happened, with the juniors coming out victorious. However, the other classes didn’t finish, due to a lack of balloons.

“The court games were really fun and competitive this year,” senior Amber To said. “I thought it was cool how each of the games were related to the homecoming theme. I ended up doing ring toss, which was actually harder that it looked, I couldn’t toss the ring onto the witch hat for the longest time. The senior court didn’t win, but it was still a fun experience.”