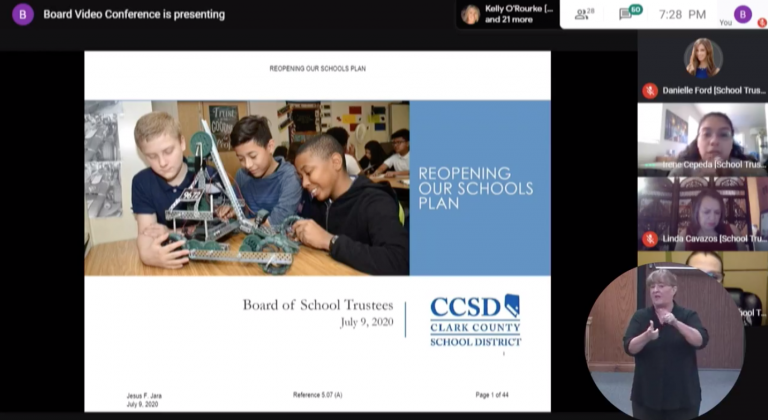 Superintendent and board members gathered on July 9 to discuss the CCSD school plan for this fall semester. With COVID-19 still progressing, many concerns were shared regarding the safety of the students and staff. Photo Credit: Screenshot of CCSD Board meeting

After three meetings and 14 hours later, the Clark County School District Board of Trustees has voted to submit a proposal for a new educational plan for the 2021 school year.

“My real concern is how do we get all of this to work in a way that students will continue to progress and staff will feel comfortable and move forward,“ District C Trustee Linda Young said. “I don’t have a problem with any of the models that we have been talking about. It just gets down to the fact that the staff and students stay healthy because I’ve had two people die on me this week.”

CCSD Deputy Superintendent Brenda Larson Mitchell re-presented a revised plan from the meeting on June 25th that also included additional materials focused on the suggestions and areas of concern such as internet access that were brought up by the board.

“We have had a lot of magnet school principals talk out about how this plan will work really well for them,” District B Trustee Chris Garvey said. “I think for parents and kids to only have to keep up with four classes and teachers to have the lower class load of students are things that in my mind are all positives and this community needs to embrace doing things a little differently.”

During the presentation, many of the school trustees, including District C Trustee Linda Young, spoke out about their concerns, which revolved around the genuine safety of the staff and students after revealing that she had experienced two COVID-19 losses.

“I do not have the comfort level for staff and students,” Young said. “I love kids, it’s just I do not want to be responsible for somebody getting sick and dying.”

Halfway through the presentation, District F Trustee Danielle Ford motioned for an additional plan that included starting the year with 30 days of distance learning and offering an option for in-person education to students with special needs as well as kindergartners and Pre-k.

“The requirements are simple and whether or not the plan that Trustee Ford has proposed would follow the guidelines I think brings a lot of questions in my mind because it does not address what happens to other students,” Eleissa Lavelle from the Office of General Council said. “We would have to take a look at it and see if it follows the guidelines and it could be implemented by the district but there might be some negative repercussions.”

However, this plan was quickly defeated by a 5-2 vote with only Ford and Young voting in favor.

Following the presentation, board members continued articulating their concerns one of which included students who choose Cohort C having access to the school lunch program.

Superintendent Secretary Mike Casey pointed out that The National School lunch program has to verify for the school eligibility of the students.

“The psychological stress, hunger, and isolation are all adding up to more risk for the students than the virus poses and I think it needs to be at least addressed,” Garvey said. “I would ask to communicate with the governor and the Nevada State Department of Education that their regulations and requirements for social distancing has created an issue of hunger for a large majority of our children who will have to walk to get multiple meals and who rely on those meals to survive.”

Now that a plan has been voted on and submitted for approval, principals can begin working on creating student schedules and parent’s can complete the survey to decide which of the cohorts they would like their child placed in.

“Our region leadership teams will be working very closely with our school principals to provide the professional development and training for developing these schedules that are conducive to their needs,” Region I superintendent Dustin Mander said. “It is very important that we do focus on the health and safety of our team and that is our number one priority.”