Clubs encouraged to participate in the King and Queen of Heart competition Third annual fundraiser will end Feb. 14 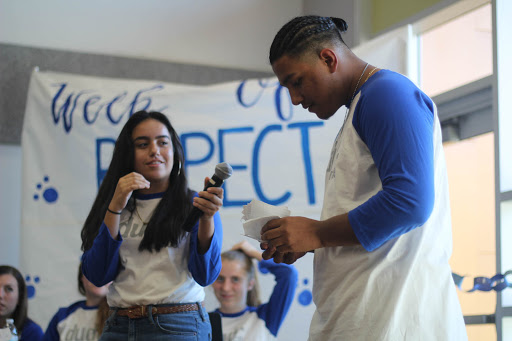 Conducting Coyote Congress, juniors Cecelia Gonzalez and Daniel Cabrera speak about the Week of Respect. Club delegates for the King and Queen of Hearts competition will be announced at Coyote Congress on Feb. 2. " I hope that there are more clubs that would want to participate," Gonzalez said. "Since there are so many clubs I hope many of them join in on this fundraising." Photo Date: Oct. 6, 2017 Photo Credit: Kiara Ives

Prior to last year’s fundraiser for the American Heart Association, Student Council is advocating for all clubs to battle for the crown. Active members that wish to participate will announce their delegates at Coyote Congress on Feb. 2; the winner of the competition will be announced on Feb. 14.

“This year we got some of the new clubs created and involved in school,” junior Cecelia Gonzalez said. “Everyone in the assembly commission is talking to the advisers of the multiple clubs so that they will all participate in this fundraiser.”

Currently, six clubs have registered to participate in the competition. Money collection will take place Feb. 5-9.

“The direct benefit is that the money stays in Nevada because we donate to the state chapter association,” StuCo advisor Miriya Julian said. “Also, we haven’t done enough Miracle Minutes so it gives us an opportunity to do so.”

Representatives from each club will be given sashes to wear and the donation buckets to collect money for the fundraiser; money will be given to the banker at the end of each day until the end of competition.

“All of the money will be going to a great [association] and I hope that all clubs will participate for this fundraiser,” senior Francesca Ngo said. “No matter what club you donate to, it will benefit so many people.”

Over $1000 was collected each year, including last year where Key Club won the King and Queen of Hearts competition.

“This is important because it reaches the entire student body as we are working and competiting together,” senior Courtney Jersic said. “It’s nice for the clubs to nominate delegates and advertise for their organization. It also get’s everyone involved in a fundraiser that’s worth funding for.”