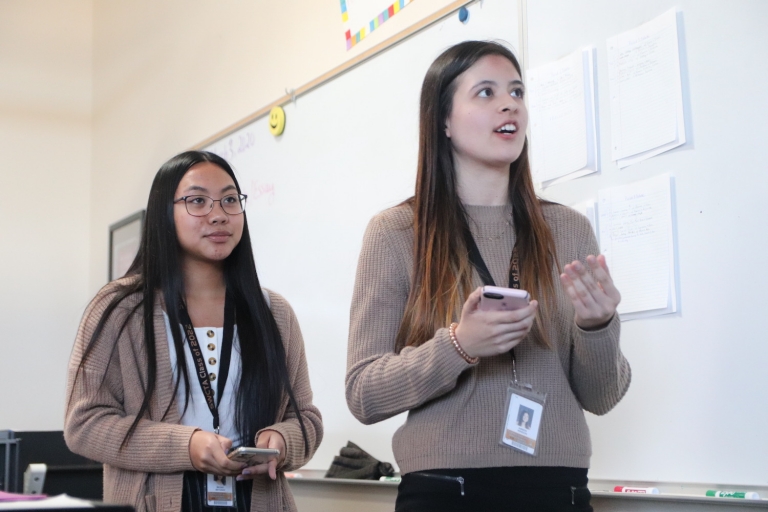 After listening to the opposing argument, sophomores Megan Bayudan and Amber Windon state their point of views on their chosen topic. Students were required to listen and build up points to argue back with their opponents. “I really liked the cross-examination because it was fun to argue and try to prove other people why you’re right and I would do it again anytime,” Windon said. “My partner and I got stuck on one questions asked by our opponents but luckily we were able to get past it and ended up winning the debate.” Photo Credit: Gurleen Swaich

In Amy Lutz’s English 10 Honors classes, students are challenged to debate amongst each other on topics related to William Shakespeare’s ‘Romeo and Juliet’.

“Throughout first semester, we’ve done essays and writings with the current text ‘Romeo and Juliet,’ so the debate really hits those other English skills, which are speaking and listening,” Lutz said.

Given two class periods to prepare for the debate, students formed groups of two or three and chose one of eight different topics to argue or support. Some include, whether Romeo and Juliet should or shouldn’t be required to be read in high school, if hate is more important than love and if the final scene is or is not triumphant.

Students were given three minutes for opening statements, two minutes for a conclusion and counterargument planning time between both groups.

“The high of my debate was getting a good grade and the lows were not knowing what the opposing side was going to say which added more pressure overall,” sophomore Kylie Chavez said.

In the upcoming unit, students will begin learning about romanticism and start reading the “Rime of the Ancient Mariner.”

“My favorite part of the debate no matter what topic you had was the cross exam because that’s the most animated, passionate part and it’s overall really great,” Lutz said.