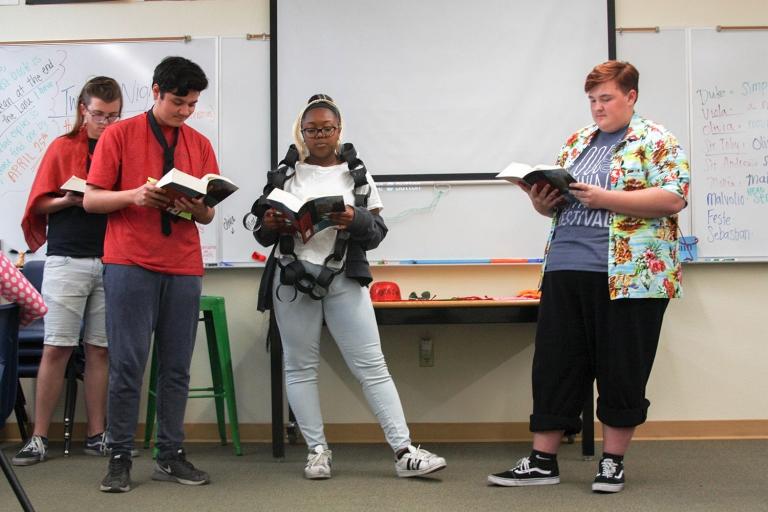 Performing as different characters, seniors Justin Martin, Jada Mack and Logan Grayson act out the scene to the class. Students in 12th grade English are performing Shakespeare's play, 12th Night. "The most challenging part of this was reading and trying to pronounce all the words correctly in the shakespearean language," Mack said. "It was all just so confusing." Photo Credit: Jackie Romo

Taking a different approach to teaching Shakespeare, Mrs. Samantha Yoder’s English 12 classes are performing the play, Twelfth Night. All scenes will be performed by students during class and at the end of each scene, clips of the movie will be played in order to fully understand the text.

Each student will be required to play a different person in each scene, with everyone acting at least twice. Students are wearing props and name tags to establish their character.

“Shakespeare’s plays were meant to be performed, seen and heard, not just read,” Yoder said. “Performing gives us the opportunity to experience Shakespeare as much as we can. This play is so zany, fun and funny, it’s kinda like what happens in the world when it turns upside down and goes topsy turvy.”

“WhenI played Feste the clown I had to wear a very colorful shirt as one of the props for this character, which made me look silly,” senior Cameron Hernandez said. “I like how I was a clown because I was one of the more funny characters.”