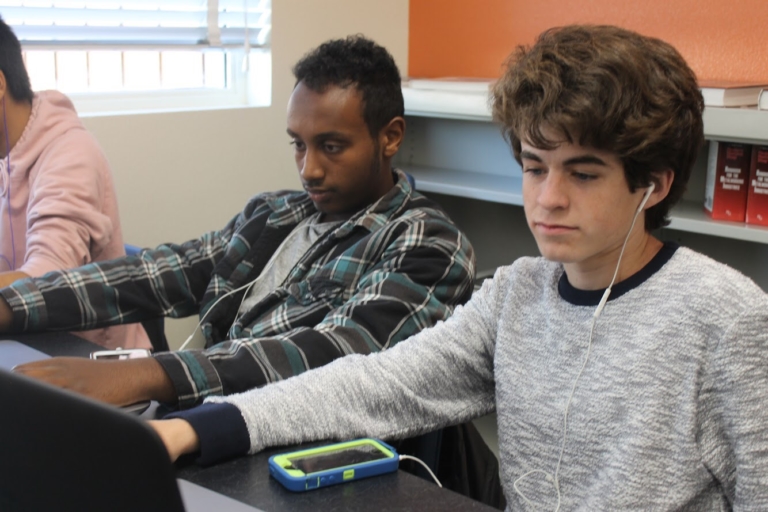 Sharing a file from computer to computer, juniors Abel Berhe and Ian Watson finish their project. Students were permitted to choose their own partner for this networking exercise. “My partner and I worked well together, whatever I couldn’t figure out, my partner could figure out and vice-versa,” Berhe said. Photo Credit: Grinesa Bajrami

As part of their Engineering course of study, juniors in Wayne Davies’ IT Essentials II class created their own wires to connect two computers together on Monday.

“A lot of students had difficulty first creating the crossover cable, which was required,” Davies said. “This was also the first exposure to making two computers talk to one another and there seemed to be a lot of students who struggled with that concept.”

Working in teams of two, students previously created an ethernet crossover cable before starting on the network. Crossover cables are used to connect two devices, such as computers, together, so they may communicate.

“Although networking is a large part of the IT field, I have learned that creating connections between simply two computers is complicated,” junior Jeiel Rueda said. “In the future, knowing we’ll have to create networks between larger groups is going to be a struggle because there will be a larger margin of error, but I’d be up for the challenge.”

To prove they had successfully connected the two computers on the same network, juniors were required to send a folder to one another. After this assignment, students will continue to work on transmitting data and learning how to create larger networks.

“I enjoyed having to figure out the assignment on my own, rather than being given the instructions word for word,” junior Sirre Taal said. “It was a [paired] assignment and we had a full class period to work on 11 steps, so it was a somewhat easy assignment. It was made harder by the loose instructions so we could apply our knowledge on networks, which we had been studying for a long time.”

IT Essentials was introduced last year to teach robotics and technology to support the traditional Engineering classes.

“This is the basis of networking, so it’s the whole heart of making electronic devices talk to one another, so [students] are getting into how the communication works,” Davies said. “From here [students] will be making discoveries on how [networking] works on a larger scale, such as learning about the cloud hub that Switch has.”