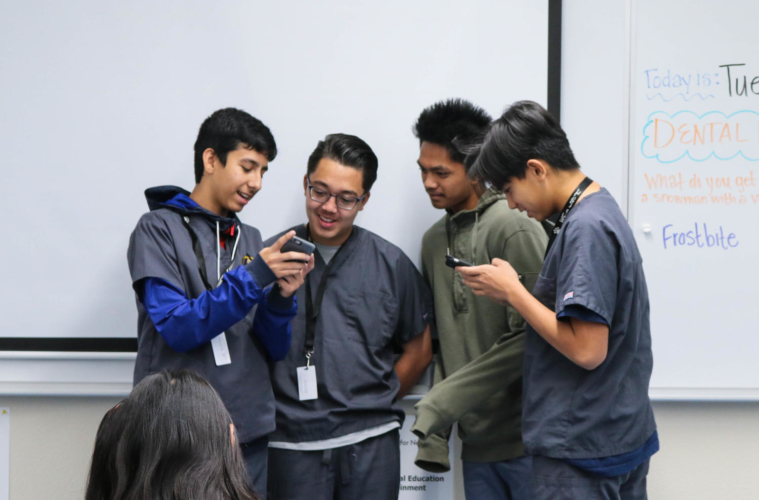 Sophomores Nick Pham, Gene Aguilia, Vincent Smith and Gerardo Hernandez sing their dental parody for the class. Students were asked to bring in their old songs to sing to the new dental teacher. “I'm actually kind of excited to write another parody,” Aguilia said. “Our first one was pretty good but i'm looking forward to making it better.” Photo Credit: Alyx Beeten

To help remember vocabulary words for future assessments, Dental program leader Kirsten Winfield is requiring students to create a parody of a song using the information they will be tested on.

“Our students just got done with dental commercials and advertisements, which they were amazing,” Winfield said. “I thought if they did this good with the dental commercials, then their parodies will be just as good. If they had fun with them last year, I thought why not. It’s not boring and it’s just another way to learn.”

Before the project began, Winfield asked students to perform the songs that they wrote last year to avoid reusing content from their last parody.

“Last year, the parodies helped me remember some vocabulary words for the vocab test, so I’m actually excited to revisit a project that helped me so much,” junior Maya Negash said. “I wanted to do a parody to ‘You’re the One that I Want’ from Grease last year, but no one would do it with me. However, this year will be different, since we’ve all gotten closer throughout the school year.”

While their previous commercial project was more of an icebreaker, since Winfield started a few weeks ago, this project will focus on the content of hygiene.

“Dental tests are hard to study for and having a song to help you study takes off some of the stress,” junior Josue Magallon said. “I’m hoping people make really catchy songs so I can use what I learned in future assignments.”

Students will be allowed to pick groups of four or less to perform a parody of a new song of their choice. Songs will be sung in front of the classroom with a karaoke version of the song.