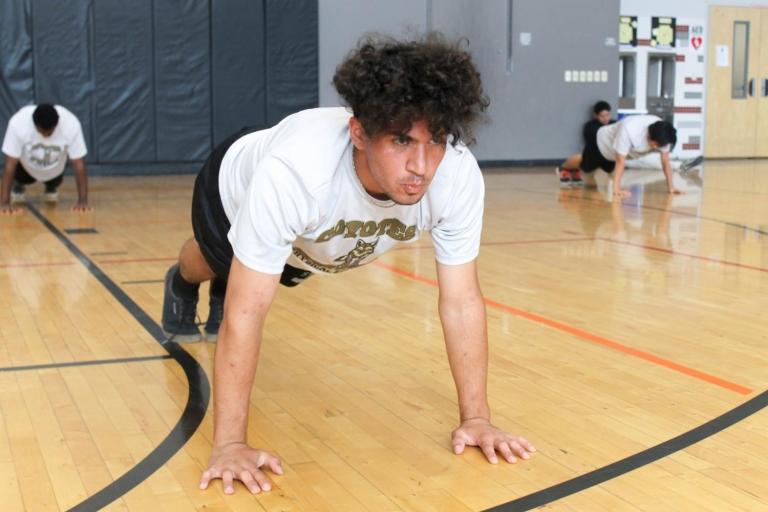 While warming up before class, sophomore Amer Aldabagh keeps himself up in a plank position. The first open gym happened last month. "I think it's really cool that [Coach Mack] is holding an open gym to let students participate in a sport," Aldabagh said. "It's a good way to make up for the fact that we don't have sports here." Photo Credit: Grinesa Bajrami

Without an official intramurals schedule in place, campus security monitor Coach Mack has decided to restart a weekly open gym.

“The reason I started [having an open gym] is because my love and passion is coaching and being around basketball,” Mack said. “Whenever kids want to play basketball and I have the opportunity and time to open the gym, I’m down for it.”

Since Mack only told a few students, open gym had to be notified by word of mouth rather than on the announcements or news. Other students discovered the event while passing by the gym after school.

“At first, I didn’t know that there was an open gym, but I saw that there were people waiting outside … [so] I joined because I really like basketball,” senior Thurein Tun said.

“I didn’t go to the last open gym because [my friend and I] were not prepared,” junior Muhammad Adipratama said. “We didn’t bring our PE clothes and decided to sit against the wall to watch instead.”

“[Participating in the open gym] will allow students to blow off some stress because they work so hard in school, and since we don’t have any sports here, I wanted to give them the chance to play basketball and play sports,” Mack said.