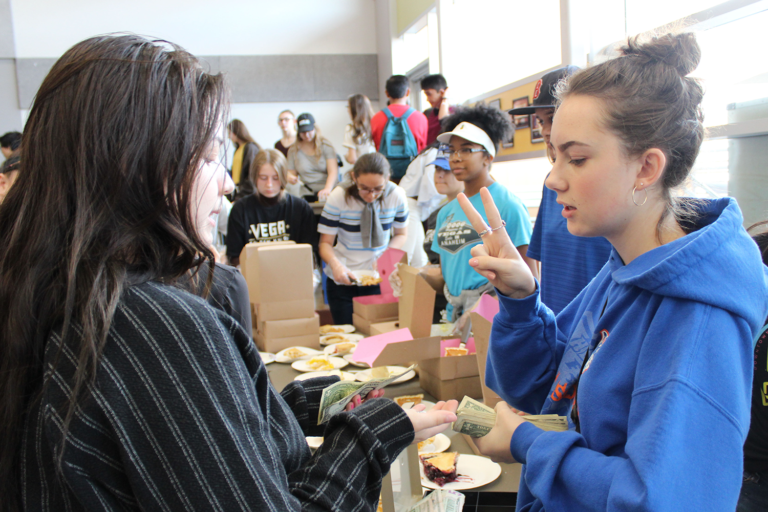 Collecting money, senior Emily Hollister exchanges a slice of pie to students. This is the ninth year Pi Day is being celebrated at SouthWest. “I think that Pi day is a good way to do something fun but also easy at our school,” junior Jessica Wiley sayed. “It’s good to have a day where we can all eat desserts and gives us a break from the usual routine of just eating our lunch.” Photo Credit: Kiara Ives

In celebration of Pi Day, student council will be selling pies during both lunches on Thursday, March 4 for $2 each.

“We will be selling pies tomorrow because of the digits of Pi are 3.14,” junior Stefanos Bingham said. “Pi Day is a fun thing to celebrate with the students because almost everyone loves pies.”

The favors of pie that will be available include apple, cherry, blueberry, coconut cream, banana cream and chocolate cream. The remaining pies will be refrigerated and sold on Friday, March 5.

Instead of cutting the pies upon purchase, the slices are now pre-cut by culinary students.

“Usually, we cut the pies as people buy them, so it makes us work slowly and causes a backup in the line,” Bingham said. “This year, we are hoping that the pre-cut pies help us hand them out faster and more efficiently.”

In My Eyes: Anela Okalani

60 pies were purchased from Pies Unlimited. The money raised will go back to Student Council for the rest of the year.

“I think that selling pies is a good way to just give students something to look forward to at a low price,” Wiley said. “I know there will be a lot of people in line, so I’ll be sure to get my pie right away.”