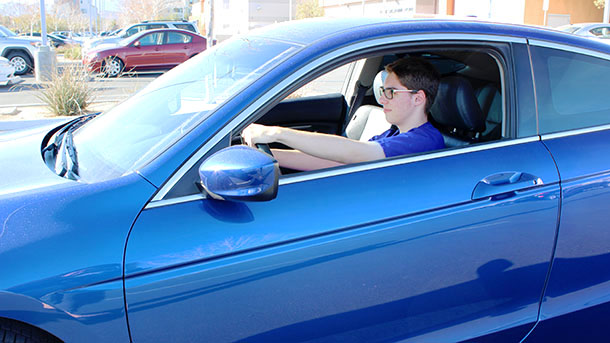 During winter break, junior Brandon Hatch was surprised with a brand new car. He plans on taking his driver's test later in the year, but first, he must meet the attendance requirements due to the new law. "I think a law to control such things is a good idea in theory, but that in practice, it's not going to go as administrators or law enforcers may plan for it to go," Hatch said.
Photo Credit: Jen Chiang

Effective Jan. 1, Senate Bill 269 will require all students under the age of 18 to provide a DMV-301 form signed by a school official in order to apply for a Nevada driver’s license or learner’s permit.

“I think what the state is trying to do is encourage students to complete high school. Once you get a car, you start working, and then you eventually quit going to school and I think that’s the main focus of the law. It’s addressing high school dropouts,” Assistant Principal Mr. Michael Butler said.

The student must attend at least 90 percent of the current semester with no more than 10 unapproved absences for a non-block schedule school and no more than seven unapproved absence for a block schedule school in order to apply for these documents at the Nevada Department of Motor Vehicles (DMV). Students who do not meet the attendance requirements but turn 18 years old during the period of their ineligibility are still unable to obtain a driver’s license, Fox 13 reported.

According to the Las Vegas Sun, students declared as a habitual truant, a student who misses school three or more times during a school year, can receive a sentenced suspension from 30 days to six months.

“Going to school is a privilege and driving is a privilege. When you’re not in school, what are your doing? If kids aren’t attending school when they’re required to, should they be allowed to drive?” College Center Coordinator Mrs. Lisa Moore said.

Once a student has excessive absences, a truancy officer will confiscate that student’s driver’s license and mail it to the DMV, Fox 13 reported.

Parents of students who are considered habitual truants can appeal to school officials and receive a hearing to challenge their child’s designation. School officials may waive the penalty if a hardship exists, the Las Vegas Sun reported.

“If there isn’t a legitimate reason, it’s probably not going to matter. You’re supposed to be at school. It shouldn’t be an issue,” Butler said.

In addition, students who are applying for their driver’s license for the first time will have a 60 day delay.

“When I went to the DMV during winter break to take my driver’s test, they had just started the rule so I wasn’t able to take my test without signing a form and I was pretty sad about it,” junior Leann Carambas said.

According to the Las Vegas Sun, the law does not apply to students who have a high school diploma or completed a general education development certificate.

“I think it’s smart, because kids who ditch shouldn’t get a license. If they do, they’d just be able to ditch school even more. They don’t deserve the freedom,” junior Camryn Carr said.

The new law is sponsored by Sen. Aaron Ford. According to the Las Vegas Sun, Ford hopes the law will encourage students to remain in school.

“Attendance has never been a problem for me, but I agree with the law because kids should be taking school more seriously, especially seniors. I think it’ll encourage more kids from ditching school because more kids will put more effort to go to school,” senior Hannah Tonti said.