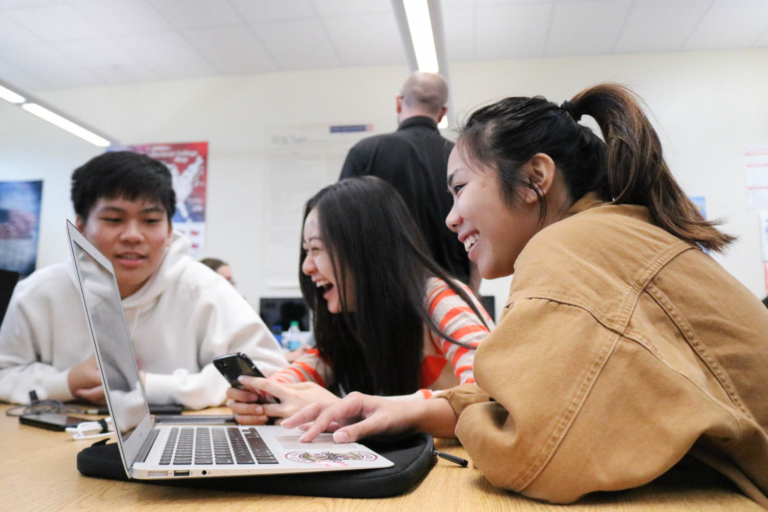 In the midst of forming their moot court arguments, seniors Jackson Truong, Jamie Khoung and Marissa Lazaro share a laugh. Students in Mr. Joseph Juliano's U.S. Government classes have been working on their moot court projects for the past two weeks. "I’m really nervous for the oral arguments. When researching about it and what a moot court is, it seemed so formal and official," Khoung said. "I don’t know if I can do it like [real judges and attorneys] do." Photo Credit: Zhen Yu

Concluding their month-long unit on the institutions of national government, students in Mr. Joseph Juliano’s U.S. Government classes are preparing for their upcoming moot court.

“We are currently covering the branches of government and the moot court is a project designed to help the students understand the powers of the government,” Juliano said. “I have been doing [moot] courts for years now. It’s a good, interactive way to learn about government and practice making arguments.”

Each student was assigned a Supreme Court case, then given the role of either a judge or attorney. After forming groups, the attorney’s prepared their arguments and rebuttals, while the judges researched the cases to form questions.

“I am doing the Texas v. United States court case,” senior Shay Carnes said. “We are arguing over whether or not DAPA is constitutional or not. It’s a hard argument to do because the emotional side of me wants to help these immigrants, but I know that it’s not constitutional logically.”

After seven years of assigning moot courts, this is the first time Juliano has used the Arizona v. United States case for the project.

“I keep the same format every year, but I changed up one of the cases this time around,” Juliano said. “There’s a difference in the cases, but I [follow] the same process that I like to keep.”

New education tools introduced by teachers for virtual education sessions In order to resemble their regular classes, websites like Nearpod, Pear Deck, Socratic will be used

The students will be presenting their oral arguments on Thursday, Feb. 7. Once this unit is completed, the classes will start learning about the Bill of Rights.

“I think doing a moot court is really cool because it allows me to understand the concept of it more,” senior Jamie Khoung said. “My case is United States v. Texas and I am the judge for the case. I’m scared of public speaking, but I will do my best [during the oral arguments].”