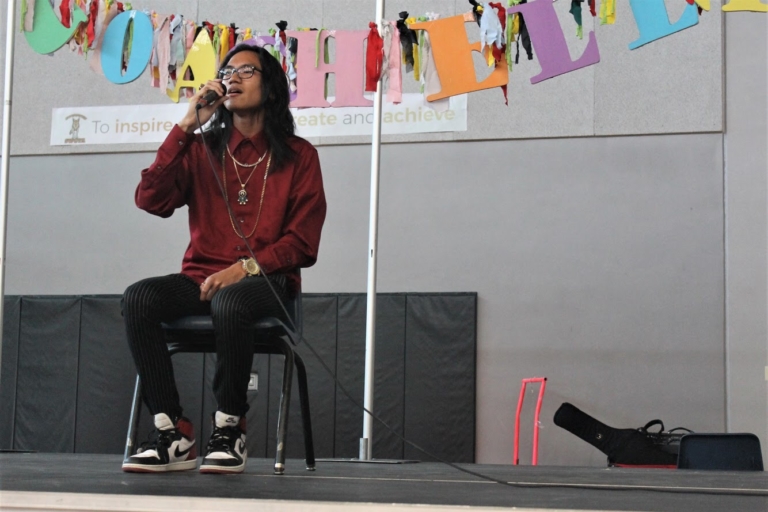 While singing 'So Into You' by Childish Gambino, junior Patrick Surban performs at Coyote Coachella on Thursday April 13, 2018. “The reason why I performed at Coyote Coachella last year is because I wanted to distribute my image and my talent to the school,” Surban said. “Rapping is something I love to do and it is apart of my everyday life. Coyote Coachella wasn’t my first live performance, but it will always be a memory that I will cherish forever.” Photo Credit: Grinesa Bajrami

Allowing students to perform at the fourth annual Coyote Coachella, Student Council will be holding auditions for their on Monday, March 25 and Tuesday, March 26

“We started doing Coyote Coachella because we wanted to have a spring event that all students could attend,” junior Bianca Horst said. “Since Coachella actually happens in the springtime, we thought it’d be a good to event to have in school.”

Coyote Coachella will be from 2 p.m to 4 p.m on Friday, April 5th in the gym. In previous years, Coyote Coachella was planned to be on the field, but due to constant weather problems, it has always been moved into the gym.

“I really like selling my original art, including prints and stickers,” junior Ayame Faria said. “It gives me a lot of practice for marketing my art. Last year, when I sold my art, it was a little bit slow in terms of sales. A few of my plans fell through last year, so I was unable to sell all the stuff I wanted to, but I enjoyed it anyway.”

Those interested in auditioning must fill out a Google Form, which will soon be posted on the ‘SWCTA Announcements’ Classroom. Booths will be offered again to allow students to sell their art, clothing and other items. Prospective performers are allowed pick an audition day to attend, in the ballroom, and the final list of performers will be made and released by Student Council.

“Last year, [my friend and I] came up with ‘The Socially Awkward Song’ and ever since, our friends have been telling us to audition with it for Coyote Coachella,” junior Kennedy Nelson said. “We’re mostly doing it for fun and I’m most excited for the performance aspect of it.”

Similar to last year, prizes will be offered to the best performers per category, which will be released at Coyote Coachella. The categories include vocalists, vocals with instrumentals, instrumentalists and dancers.

“StuCo’s personal goal for this Coyote Coachella is to get more people to attend because we believe that it’s a great way for the student body to get involved and have fun, by being able hangout with friends and see good performances,” Horst said.