SkillsUSA collaborates with FBLA to host Annual Game Night After school on Friday from 2:30 to 5 p.m. 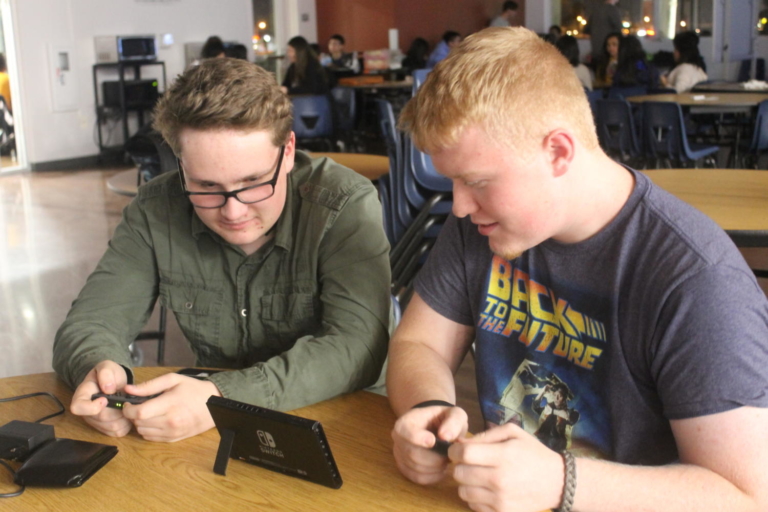 During a Mario Kart 8 match, senior Tyler Brant-Juarez and sophomore Will Grube stop to take a break after an intense race. Game night was held on Jan. 16, 2018, last year. "The game got really intense after a couple races, the other players were screaming and standing up, getting really into the game," Grube said. Photo Credit: Grinesa Bajrami

In collaboration with Future Business Leaders of America (FBLA), SkillsUSA is hosting its Annual Game Night in the cafeteria from 2:30 to 5 p.m.

“I’m going to Game Night because it’s a Friday, so I’d like to enjoy playing games and having fun with friends before I go to work after the event,” senior Laurence Elsava said. “Other people should go because who wouldn’t want to end the week with friends and just have a good time? There’s classic games we all played as a kid like Wii Sports and Wii Play.”

Students are allowed to bring their own gaming devices to the event. Some of the featured games include Super Smash Bros. and Fortnite. Aside from video games, board and tabletop games will be included, such as Uno and Monopoly.

“I went to the Game Night last year and it was actually a lot more different than I thought it would be,” senior Zhen Yu said. “It was funny because there was just a group of people battling it out in the back of the cafeteria on a blow-up projector screen.”

Players get to choose how they want to rotate from each game. There will be a Super Smash Bros. tournament and the winner will receive an Amazon gift card.

“My favorite part of Game Night would be just playing the games [because] I grew up playing games and it’s always been one of my fondest memories,” senior Kesler Cervantes said. “The thing I’m most excited about is our Super Smash Bros. tournament that we are going to have. That game has always been a big part of my life, so it’s nice to share that same nostalgia with other people.”

In order to attend, an entrance fee of one dollar must be given at the door. Snacks and refreshments will be sold at the event.

“People should go to Game Night because it’s another place where friends can just hang out with each other,” Yu said. “I know people who complain that they don’t get time with their friends but this is their opportunity. Also, who doesn’t like to win bragging rights against friends?”