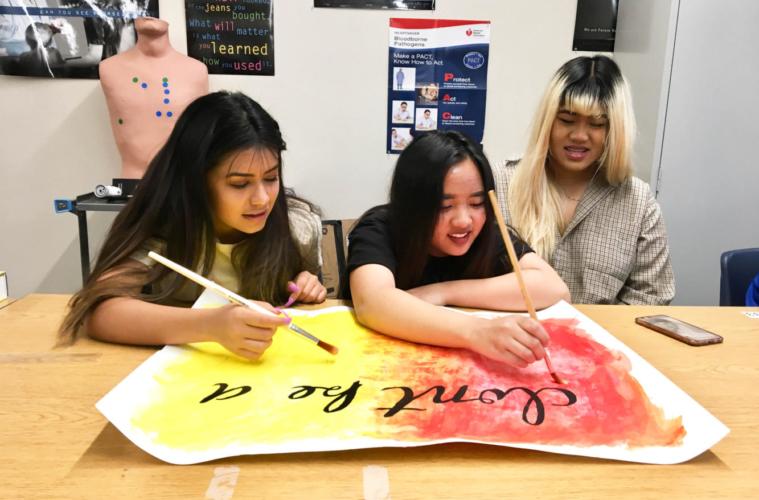 Promoting students to avoid smoking, Respiratory Therapy sophomores Destiny Rodriguez, Alyssa Victoria and Isabelle Phay work on posters that will be hung around campus. Students have been working on the project for nearly three weeks, in hopes to create an effective campaign to avert COPD. “I’m excited for this project to come together,” Rodriguez said. “My group has been working on water colored posters that’ll be hung around school. I think since we’re using a creative technique rather than trying to scare students, it will be more effective.” Photo Credit: Cosette Zielinski

With a stroke of a brush and the push of a button, sophomores in Respiratory Therapy have been creating public service announcements to encourage students to avoid smoking.

“I feel really good about this project because it is really student driven, since I have been trying to be a mentor rather than tell them ‘this is exactly what you have to do,’” Respiratory Therapy Instructor Lori Martinelli said.

Each group of students was assigned with the task of creating a poster, brochure, video or a social media account that would educate the public on the negative consequences of smoking.

“Most projects don’t require everyone to communicate with each group, usually teams are split up to do duplicate projects with different designs and concepts,” sophomore Alyssa Victoria said. “However, with this project communication with other groups is necessary because we need everyone’s ideas to correlate with each other.”

The completed public service announcements are expected to be displayed in the halls and aired on the morning announcements through the end of the year.

“I think that it’s a good idea that we’re spreading the messages around school,” sophomore Carrie Lee said. “Smoking weed, cigarettes and even vaping is especially harmful to teens since they are still developing. Smoking in general is the leading cause of chronic obstructive pulmonary disease, which is what we are trying to educate students on.”

Similar projects, like truth.com, have made efforts to decrease tobacco usage in teenagers.

“Smoking weed and vaping can be harmful to your lungs in the same way as cigarettes,” Lee said. “It’s not just the chemicals that are harmful, but inhaling those warm vapors can damage the airways too. Many people have the misconception that if they smoke weed or vape then their lungs aren’t damaged, but it is far from true.”