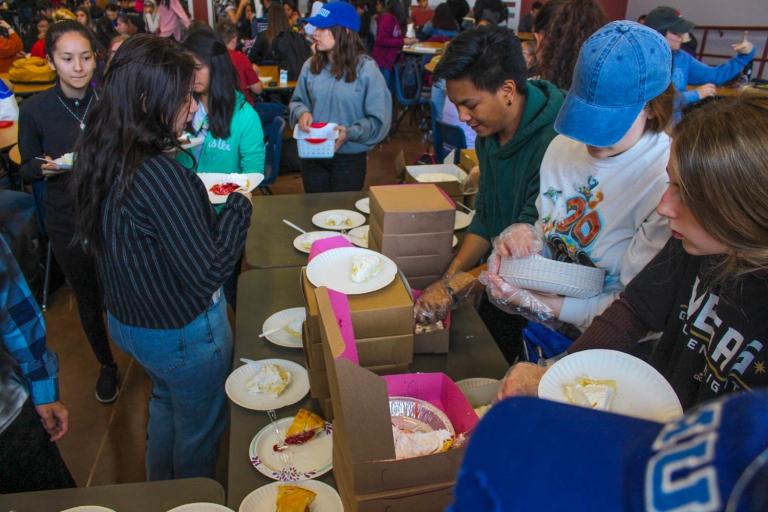 Serving food for Pi Day, Student Council sells pies to students. This was the eighth year Pi Day was celebrated. "I think selling pies on Pi day is a good way for students to do something different than a normal lunch," senior Courtney Jersic said. "Since there are two new flavors added this year, I think it was more exciting than previous years." Photo Credit: Kiara Ives

In honor of yesterday’s Pi Day, StuCo continued the tradition of organizing an event to sell pies during both lunches.

“I think selling pies on Pi(e) Day is fun and creative way to get other students to enjoy something together,” StuCo sophomore Stephen Bingham said. “I love seeing how happy my friends get when they finally buy a pie.”

Two new flavors of pie were added: lemon cream and strawberry cream. Flavors from previous years were also available, such as banana cream and chocolate cream.

“I bought a pie because its not something I get to eat everyday for lunch so it was a nice change,” senior Angelique Zuviri said. “Pies are just delicious in general so I was really excited.”

Slices were sold during both lunches for $2, but students could have paid for eight slices in order to receive an entire pie.

“Just selling to the student body is what I looked the most forward to,” StuCo junior Emily Hollister said. “This year we bought 30 more pies than usual so I think that in order to improve for next year we should have pi day for two days instead of one.”

StuCo purchased 80 pies from Pies Unlimited. The remaining pies will be sold today at lunch.

“My friends and I are all pitching in to buy a pie to share with the whole table since it seems worth more,” sophomore Zaw Wai. “We would have to vote on our pies, but I would want chocolate because it’s my favorite flavor out of all.”