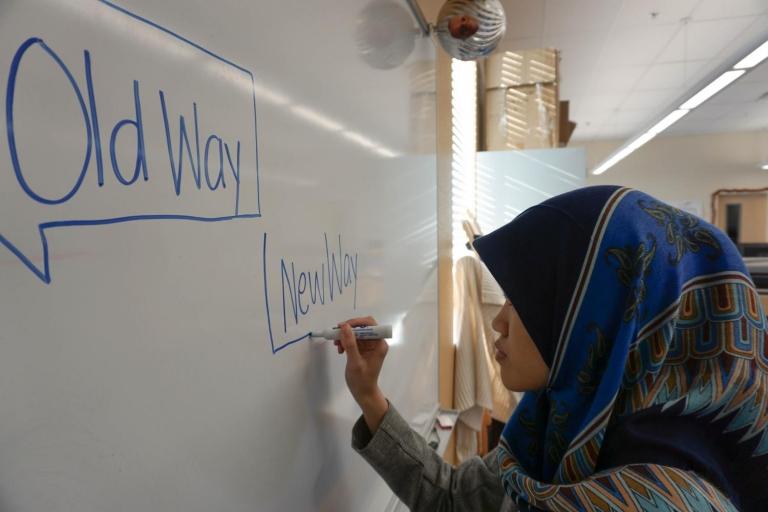 I am often perceived as someone with nothing to say or comment on, but I consider myself the opposite. When I write, I am not afraid to say what needs to be expressed. If I become a journalist, I know that my voice will be louder than ever. Photo Credit: Zhen Yu

As I chew on a spoonful of soggy cereal, my eyes flicker to the TV across from me. I watch a white woman with bobbed blonde hair report the day’s events. Drowning out her voice, my eyes glaze over in realization that all of the other journalists I’ve seen on TV have shared similar physical attributes as the woman on the screen.

My passions and ambitions are always changing, and the occupations I go after usually come and go. However, it wasn’t until recently when I considered pursuing journalism in the future. This decision made me wonder–why have I never thought of being a journalist before?

I grew up watching networks like CNN and PBS alongside my family and in classrooms, and I was interviewed by a white woman for the local newspaper in middle school. While watching these networks as a child and meeting a journalist for the first time, I developed a mentality in which I thought that an Indonesian-Muslim like me could never be represented on TV in the U.S.. This was due to the lack of minorities that I saw working as journalists.

According to a 2015 ASNE Newsroom Diversity Survey, approximately 12.76 percent of employed journalists were racial minorities. Furthermore, I discovered that the number of minorities working for the daily newspaper in 2014 was 13.34 percent–nearly half amount of minorities in broadcast journalism. However, a 2017 ASNE Newsroom Diversity Survey recorded that the percentage of minorities increased to 24.3 percent. I even started noticing the minority increase on networks such as Vox and AJ+ after watching Asian and Middle Eastern women report current events.

Despite the increase in the demographics of minorities working as journalists, it doesn’t really change how I don’t feel represented. I do journalistic writing, but a byline does not have the same impact as actually seeing a minority on TV. Since there wouldn’t be a visual of me in my articles, my audience would only assume my race based on my name or by looking me up. And although some journalists share the same racial and religious traits as me, they aren’t faced with the same problems I’m afraid of encountering someday.

For example, there is a Muslim woman who works for AJ+ and she has ventured very far into the journalism spectrum. Despite what she has accomplished, she does not wear a hijab. This leaves some of my biggest questions unanswered–since journalism is a social workplace, would my hijab change the way strangers communicate with me? Would the conditions of this career choice pressure me to take off my hijab?

Nonetheless, I am encouraged by my own determination to become a journalist, even if that means taking risks. I want to be a journalist because I’m driven to do what others like me are afraid to do. I want to tell the thousands of stories that are waiting to be heard. I want to start a paradigm shift and frame the way the world perceives minorities in journalism in hopes of inspiring more to join me.