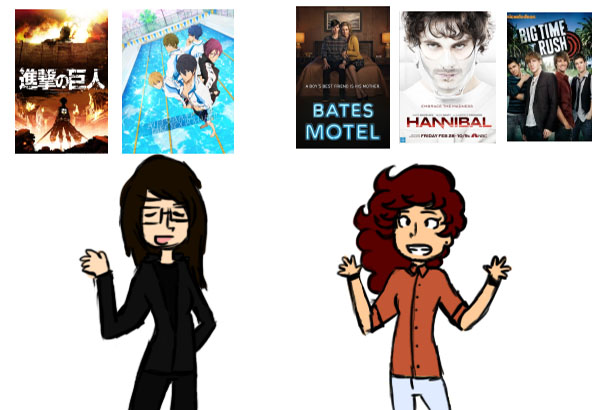 Amanda: Maybe it’s just my preference, but I believe anime prevails over anything else on television. Saying that sounds really sketchy, though I promise it’s not as bad as it sounds.

Andrea: It sounds like you’re making a generalization about all tv shows, which you can’t really do, because there’s so much on television now.  You’ve got this gigantic spectrum ranging from animated comedies to realistic crime scene shows.  It’s not really comparable. So . . . I think all of television prevails over anime.

Amanda: I’m not really making a generalization. I do know that tv shows are different, but when it comes to animation anime tends to be more interesting. Of course, not every single show is a hit and some series are skeptical, but most animes are interesting and fun to watch. Besides, you don’t see characters with bright pink hair on tv.

Andrea: Well, clearly you’ve never seen LazyTown. I’m pretty sure I forced you to watch a couple of episodes of that. Anime tends to go into the weirder subjects, and I don’t mean the good kind of weird. Here, perfect example: Dangan Ronpa. Don’t get me wrong, I loved it (back in my anime phase – I’m in the never ending boy band phase right now), but the entire concept was just . . . weird. Like, you trap fifteen kids in a boarding school type place and then force them to kill each other so they can leave? It was just weird!!!

Amanda: Excuse me, but you and your friends were totally into it. You’re still into it too, according to your blog. Animes are meant to have different storylines, you know. That way you won’t get the same worn out plot like you do with TV shows. There are so many murder mysteries on TV that it’s pretty surprising that people keep watching them. At least if you have some obscure plot in an anime where humanoid giants are hunting and eating people for fun, it’ll be recognized as something original and draw in fans. The only downside to anime is that you have to constantly read subtitles, but hey. No big deal.

Andrea: For the record, I haven’t made a post about it since September.  And there isn’t JUST murder mysteries on TV. There’s comedies like SNL, cartoons like Steven Universe, crime shows like Hannibal (it’s super freaky 10/10 would recommend) and I could go on and on. Subtitles are super inconvenient, by the way.  If you’re trying to multitask there’s no way you’re going to understand that episode of whatever anime you’re watching right now. That’s why I recommend //gasps watching the dubbed version, but ONLY if you’re multitasking.

Amanda: Most comedy shows are the same attempts at humor with different characters and settings. Anyway, going back to the subs and dubs, it just adds another point why anime is better. You could have a series with the original Japanese voice actors, but if you don’t want it, you could have a dubbed version. There’s also a huge variety of animes, so everyone can find something they like. The characters have a lot of depth to them, too. Who would want to pass up a nice episode with commander handsome (my boyfriend), Mr. Erwin Smith?

Andrea: You keep saying everything is the same. It’s the same thing with anime! I’m pretty sure Sailor Moon, Galaxy Angel, and Puella Magi Madoka Magica all have the same concept! They’re all magical girls that save the world.  There’s a huge variety of TV shows too!! I’ll pass up an episode with commander “handsome” and re-watch an entire season of Big Time Rush instead.