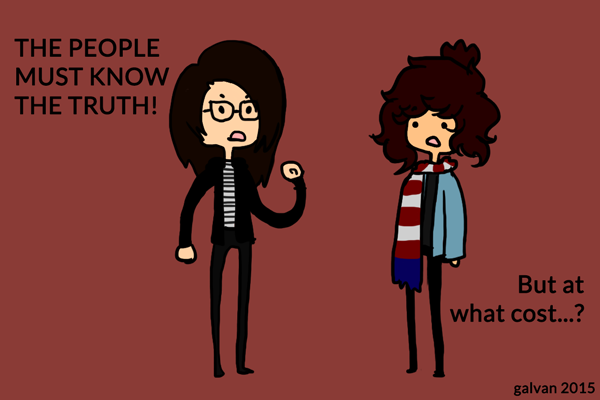 Andrea: While I don’t agree that censorship in mainstream media is 100% good, I believe that it is necessary in order to establish balance and keep the peace. Showing gruesome reports of the true reality of our world could actually scare the citizens and eventually lead to complete anarchy. It’s important to have some form of control over the citizens so that the peace never ceases.

Amanda: Having control over people in the sense of keeping rebellions or revolts to a low is a good concept, but in reality people have the right to know about what’s happening. What’s shown in the news and on television is only what’s been approved to be shown. The news only shows a part of what’s actually happening, and often people have to resort to an eye witness account for accurate information.

Andrea: That’s just the nature of news. Everything gets twisted around before it’s stated to the public. It’s like a game of Telephone; the information goes through several different stages before it finally comes out and is severely modified. The people may have the right to know, but do they actually want to know? If they do want to know then they can go find out the true information on their own. The media just has to give the watered-down version for the people’s safety.

Amanda: When people aren’t properly informed, the news will get twisted more than the television already has. Everyone will have learned different things about an event, and the details won’t add up. If the news wasn’t censored or at least censored less, the public would have a more accurate understanding of current events. Sometimes ignorance isn’t bliss.

Andrea: Even if the public understands more, it’s unknown how they will react. Sure, there may be protesting going on here and there, but there’s people who may decide that it’s okay to act violent. Violence is the last thing this country needs; we’re already pretty screwed up as is. The easiest way to control the public’s reaction is to limit their knowledge.

Amanda: But what if it’s a bigger event, such as what’s happened in Ferguson or more recently with Charlie Hebdo? Is it okay to limit the public’s knowledge just to keep things “under control?” Censorship is denying access to the information that people have a right to know, and newspapers have a lot of decisions to make regarding what should or shouldn’t be censored.

Andrea: Censorship isn’t denying access to information. It’s protecting the stability of a nation by limiting knowledge. The people have a right to know, and if they want to know, then they can do their research. I must sound like I’m going against everything my generation stands for, but there’s a reason that everything is the way it is. There’s a reason behind the madness. Our generation gets so caught up in freedom of speech and all these things that they don’t think about the consequences.