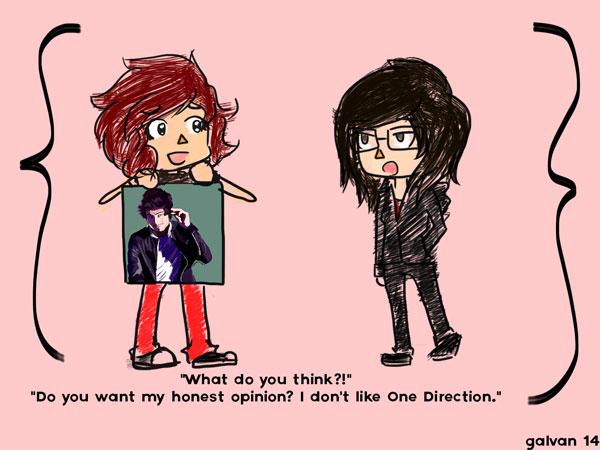 Andrea: I genuinely believe that being honest 100% of the time shouldn’t be a thing.  Yes, you’re going to be honest, which is a good thing, but you’re also probably going to stomp all over someone’s feelings. That’s not always something you’ll want to do, especially if you want to be friends with everyone, like me. I care about others’ feelings too much, so I’ll occasionally tell a white lie just to avoid crushing dreams.

Amanda: It could just be a moral thing, but I personally don’t think there’s any situation where it’s truly right to lie. I’ve never understood how some people can tell a lie without thinking twice and feel absolutely no guilt. It’s unnatural and feels plain wrong to know that you’re saying something completely untrue to a person who is going to believe it. Sure, some instances aren’t that big of a deal, but it still feels like a type of manipulation. Besides, there’s a way to be honest and not be rude about it. You don’t always need to insult someone with truth.

Andrea: Sometimes honesty can come off as rude even if it isn’t meant to be rude.  I remember several times where I’ve been honest with a person and hurt their feelings.  Of course, you also have to be honest without being immature, and that can be really hard if you’re just another dorky high school student.  Lying every now and then might seem like you’re manipulating someone, but you’re really not. You’re just withholding the truth from that person for a period of time.

Amanda: Withholding the truth from someone doesn’t sound very good, if you ask me. As far as I know, you don’t tell the truth after telling a lie. Even if you do, it’s not guaranteed that the person you lied to will pass everything off as okay. Plus, if you hold in the truth for a long period of time it’s likely that you will lose the trust of someone. That itself is enough to do more damage than being honest can.

[vision_pullquote style=”1″ align=”center”] Being brutally honest doesn’t necessarily mean you’re constantly telling someone what you think of them. [/vision_pullquote]

Andrea: Okay, let’s say you’re brutally honest to someone.  If they’re your close friend, they’re more than likely to forgive you.  If you’ve only know them for a couple of weeks, you’re going to scare them off.  With close friends, brutal honesty is okay, I guess. It’s better to tell white lies to friends you’re not that close with.  It’s a lot safer and might help you make a close friend, if you’re good at lying. (I know that sounds morally incorrect, but I’m thinking in long term right now.  A little lie occasionally isn’t going to damage you.)

Amanda: Being brutally honest doesn’t necessarily mean you’re constantly telling someone what you think of them. You don’t have to immediately share your opinions with someone you just met, because that’s not a very fun way to start a friendship. There’s a time and a place to be brutally honest, but it’s not the best thing to do in every situation possible. If you’re gonna give someone honest advice, think it through first.

Andrea: Brutal honesty should be avoided as much as possible.  If someone asks you for an opinion, just ask them if they want your honest opinion.  This might set off a red flag that whatever you’re about to say to that person might offend them, but hey, you gave them a warning. Warn your friends before you’re honest with them, and if you can’t do that, tell a tiny lie.