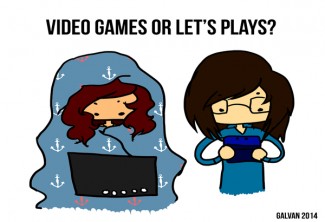 Andrea: Watching “Let’s Plays” of video games is very nice because you get to experience the game through another person’s eyes. Every person has a unique reaction to a game, and it’s always fun watching others react. Also, it’s a very good way to “try before you buy.” You can save money by watching someone else play the game and then you’ll be able to tell whether or not you’ll like it.

Amanda: Watching a video of someone playing a game isn’t exactly trying the game itself. You’re just watching a stranger go through the story and probably miss a few details. Besides, playing the game by yourself is a completely different experience. For example, if someone really hates the game, you might enjoy it.

Andrea: Sometimes if you find a Let’s Play-er you like, you’ll start to like the games they play. For example, one of my favorite LPers is TheAtlanticCraft, two Minecraft players who review mods and make mod packs. I found one of my favorite mods through them (divine rpg), and I played that mod for most of my sophomore year. I had seen other LPers play using that mod, but I wasn’t sure if I liked it until I had seen these two play it.

Amanda: I still disagree that watching someone else play a game you like or don’t know gives you the experience. I understand you may find things you like about the game, but it’s not the full experience. Another thing about LPers is that they tend to have a huge fanbase, and a few of them don’t tell very appropriate jokes for the age group that is watching.

Andrea: That’s very true, but it’s just like any other celebrity. There’s nothing any different about LPer fame as compared to actor/actress fame. That’s like saying that Taylor Swift should watch what she says because her fanbase is mostly children. That’s kind of restricting her freedom of speech. Yeah, LPers should watch what they say, but then they should also leave a disclaimer on their channel.

Rising blogger: Meet Keisha Farrales Empowering others to be the best version of themselves

Amanda: Like you said, some LPers give disclaimers, yet not all do. I understand they can say what they want, but inappropriate jokes about women, children, or race are not okay and have been seen throughout different Let’s Play youtubers. That being said, I stick with my original opinion that playing a game by yourself is a more enjoyable and fun experience.

Andrea: It’s unfortunate that the more famous LPers don’t really watch what they say. Then again, one can’t exactly try to cater to everyone’s needs, or they’ll lose their original purpose. Sometimes you just need to find a less popular LPer for a better experience. I’m just going to finish watching this I AM BREAD lets play now.