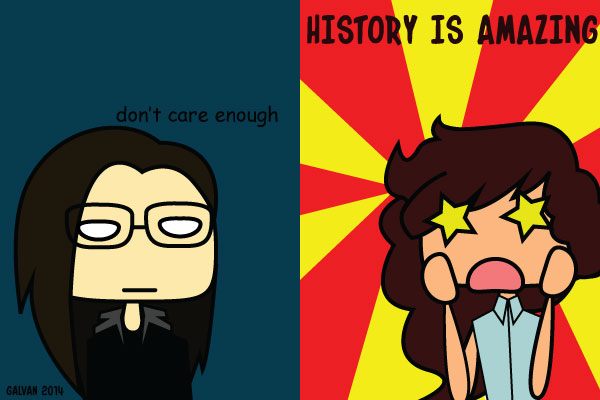 Andrea: I really think that teens do not care about a lot right now because it doesn’t have any sort of connection to them.  There’s nothing really tying them to whatever subject they’re being informed of, so they just.. don’t care.

Amanda: When it comes to caring more about school work and such, I feel like teens have no interest in the topic. After all, it’s just core subjects. Unless the class is really fun or whatever, there’s no use in showing fake interest. I guess having a connection is important too, but if the person himself honestly does not have any interest, there’s no point in caring.

Andrea: Core subjects are actually kind of interesting, but it really depends on how the teacher presents their subject.  If they project it in a very studious manner, it’s less likely to capture their students’ attention than if they were to project it casually.  If the teacher can manage to connect their core subject to things that teens are experiencing every day (let’s say . . . connect the graph of a parabola to cannonballs being fired in Assassin’s Creed IV), then there’s a higher a chance that the students will be interested.

Amanda: It’s true that some teachers do a better job at presenting lessons or important subjects in a fun way, but it’s also highly possible that they don’t present it that well either. Of course, it’s not the teacher’s fault if a student does or does not show interest in the lesson. It’s not their job to make each and every single student personally be engaged in it. As long as they get the lesson down, then cool. Students are only required to show interest to some extent.

Andrea: It’d be nice if the teacher put forth the effort to make their subject interesting, because then there’s a higher chance that the information the students are learning will actually stick in their heads, and there’s a higher chance that the students will get higher test scores.  I know this because I’ve had teachers that make their subjects interesting and I’ve gotten better grades in those classes in comparison to some of my other classes.  Of course, the difficulty of the subject is always an issue. Just because a subject is interesting doesn’t mean it’s going to be easy (see: PreCalculus.)

Amanda: Once again, it’s not the teacher’s job to make every single student care. It’s not like teens don’t care about everything, it’s just that certain things are less interesting than others. Say for example a person has a passion for drawing, but hates math. If they’re learning about math, there’s no real “care” there. You can’t force someone to show interest in things they honestly don’t care about.

Andrea: True, true. It really does depend on the person. Teachers have the power to change that level of interest, though.

Amanda: The whole subject of if teens or students care about anything is really based on the individual himself. No one is obligated to show interest in a lesson or such, but I do suppose it’s a common courtesy to not seem bored out of your mind. Some people might be better at showing they care, and others might not see a point in it at all. If someone honestly doesn’t have any interest in a subject, why force them to act like it? Maybe the question here isn’t why teens are so apathetic. Maybe it’s actually why teens are expected to show interest all the time.

Andrea: That . . . that might be it. Our school system sets us on this path and forces us to learn these things that not all of us are going to use in the future.  I’d understand if someone who decided to go into Computer Science were to take AP Calculus, but if they were forced to take an advanced English class, that wouldn’t make sense.  Plus, there are some random things I still want to learn.  I don’t even know how to pay taxes, and that’s starting to really bother me.