EDITORIAL: Not chickening out Chic-fil-A stops donations to homophobic organizations 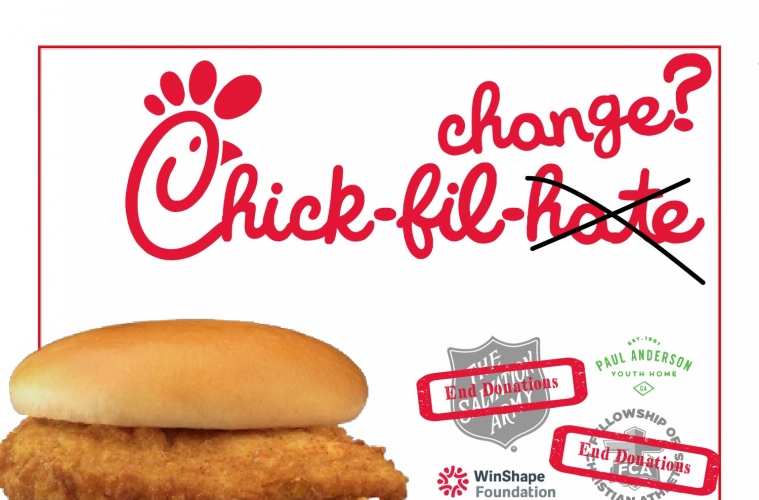 True power is in the hands of the consumer–regardless of where companies choose to donate. It is up to us, as the buyers, to decide where our money goes, not just the CEO’s of the companies we buy from. Photo Credit: Alyx Beeten

Following pressure from LGBTQ activists, fast food chain Chic-fil-A has announced that they will stop donating money to anti-gay organizations: The Salvation Army and and The Fellowship of Christian Athletes. The decision follows years of controversy in regards to LGBTQ issues from the restaurant, ignited by CEO Dan Cathy’s opposition to same-sex marriage in 2012. But it is not just Chick Fil A with a problematic donation history–CVS, Facebook and even PayPal have been under fire for supporting hateful organizations.

We believe that in a modern-day American society, consumers are right to use their power of the dollar to discourage bigoted, hateful beliefs from spreading.

Although the LGBTQ+ community have been historically marginalized throughout American history, the vast majority of Americans today are in favor of LGBTQ+ rights. This means that they have the power to punish businesses and business owners with regressive beliefs on these issues.

As consumers, we control where our money goes to by choosing restaurants, shops and even companies that align with our personal values. The only way homophobic or hateful policies, like bans on gay marriage, can stay afloat is if the institutions that prop them up receive the proper backing. By placing your money elsewhere, you take a step in ending the institutional prejudices.

The profit motive also means that corporations have more of an incentive to listen to customers on LGBTQ issues. Efforts to deny gay people the same fundamental freedoms that straight people have have been hampered by corporations listening to their consumer base.

In the age of the internet, teenagers also have the ability to pressure companies using social media. With records amount of people using apps like Instagram, Snapchat and Twitter, the power of teenagers to spread the word on boycotting bigoted companies has never been greater. The power is in your hands to foster a society of acceptance for members of the LGBTQ community.

Chic fil A’s decision is an important first step in becoming a less homophobic society. Even if they only did it to maximize their profits, that proves that America is finally becoming a place in which homophobic beliefs are being pushed out of the mainstream. Now, the obligation is on all of us to continue the fight for LGBTQ equality not just with our signs, but with our dollars.