Taking it off Hi I'm Shareen, not the new kid 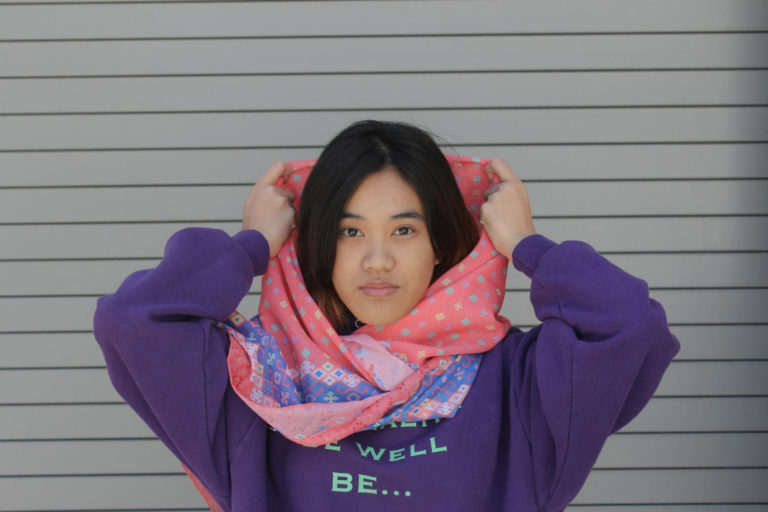 My hijab is a part of me–removing it is like cutting off a limb. Perhaps feeling incomplete is a side effect of losing a part of yourself. Photo Credit: Grinesa Bajrami

I felt a sharp pain in my right ear on the first day of school, watching lips move but not hearing a sound. Later when I got home, I found a crusty layer of dry discharge on my scarf. Grossed out and convinced that I was permanently deaf, I decided to see a doctor. Once I did, he told me that I ruptured my eardrum and advised me to take off my hijab.

The school buzzed in shock after seeing my half-bronze hair the next morning and I felt the walls whisper my name as I walked down the hallways. People stared, but only a few asked about the removal of my hijab. Others didn’t notice me until I–or someone else–told them I was me. I became the center of gossip for that whole week between classmates, teachers and friends–I absolutely hated it.

A couple of weeks passed and my hearing didn’t get any better. I had to continue going to school and other places without my scarf for longer than I expected. My hair, which was something that not everyone had seen before, became publicized for the first time since middle school.

Wearing it helped me express myself through bright colors and different patterns, and now I feel incomplete.

There have been instances in the past when people would ask me questions about my hijab–questions that every hijabi at school has heard. “Why do you wear it?” and, “Were you forced to put it on?” and, “Are you bald?” and, “Wait, you have hair? Can I see?”

I became accustomed to others’ curiosity but never prepared for the recent wave of questions. “Why’d you take it off?” and, “So, like, do you go to hell now? I don’t know how this works,” and, “You actually had hair under your scarf?” The barrage of questions started to socially exhaust me because I didn’t know how to put my explanations into words.

When my mom’s friends saw pictures of me, they thought I lost faith in my religion. Some family friends believed it was an effect of having a boyfriend, but others thought westernization was turning me into a “bad girl.” All of their comments made me scoff and roll my eyes because of how quick they were to draw conclusions. None of them were right; they didn’t take the time to consider alternative reasons.


I stuck a Q-tip too far in my ear and broke my eardrum–simple. I didn’t take it off to flaunt my new hair, impress my boyfriend or have the freedom to do more “naughty” things. This change in my appearance is only temporary; I will wear my hijab again once my ear is completely healed.

To be honest, I miss wearing my hijab. I’ve taken advantage of not using it by wearing skirts and short sleeves to survive the sweltering summer heat, but it doesn’t change the fact that I want to wear it again.  Wearing it helped me express myself through bright colors and different patterns, and now I feel incomplete.

Personally, I am open to answering questions as long as a person is respectful about it; however, not everyone is comfortable discussing their situations, so be cautious. Still, asking directly is far better than making assumptions or spreading rumors. Once you learn how to steer away from speculation, you’ll focus more on the truth rather than what you think is the truth.