The Overlooking of Asian-American Hate Crimes Their lives matter too, and need to be protected 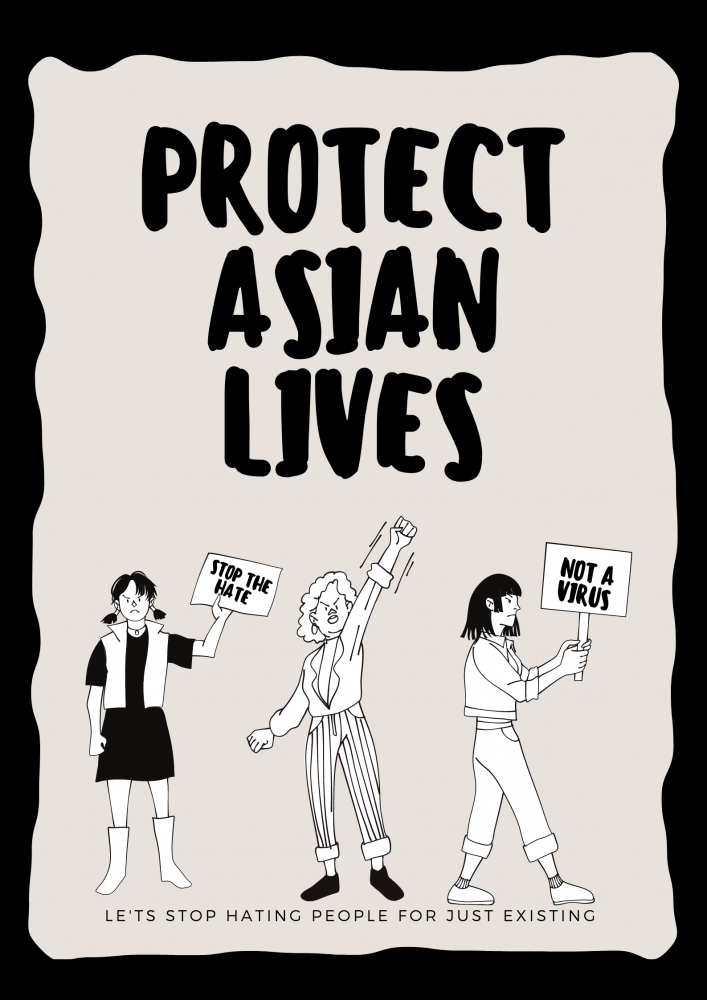 These recent attacks on Asian Americans are not getting enough news coverage, so people need to post about it on social media to spread the word. Art Credit:Madison Land

Recently, there has been a surge in crimes against Asian American communities. An 84-year old man in San Francisco was killed by a 19-year-old boy for no reason. Another man and his 3 and 6-year old sons were stabbed in the supermarket. And recently, a white man went into a spa and shot 8 people, killing 6 Asian women in Atlanta.

Racism against Asian Americans has been normalized for quite some time and has even been deemed as not as “big of a deal” as racism against other minority groups. Asian TikTokers and influencers, like “staceyismom,” have been vocal and have been dedicating most of their content to combat racism against Asians and in general, giving me and other non-Asian people a perspective that we know nothing about.

Asian Americans have been labeled as the “Model Minority,” meaning that they are perceived to have the most success amongst minorities. This myth has made it so that racism against Asians is downplayed or not taken as seriously because people have the preconceived notion that Asians cannot experience racism. This myth has drawn a division between Asians and other minorities, and perpetuates the stereotype that Asians are at the “top” while everyone else is at the “bottom.”

This myth has been very harmful to the Asian community.  During a recent conversation, a friend who is Asian told me about the racist comments people would say. She always felt as though the racist comments people would say about her were downplayed and treated as jokes. She felt as though she could not speak up and defend herself as people would say she was being dramatic, and brush it off as not being that big of a deal. Racism against Asians can be seen as lighthearted jokes, not as perpetuating offensive stereotypes and encouraging harmful actions.

When the attack on the 84-year old Thai man happened, I saw some Asians on social media, who were rightfully upset, blame the entire Black community for the actions of one individual. The Asians who were professing their anger, used their support for BLM as a way to make Black people feel guilty for what one boy did. This caused tensions between the Black and Asian community; where Black people were becoming offended because people were using this incident as an excuse to be anti-Black, and not to mourn the victim and try to give him justice.

Black people, as a whole, have been getting blamed for these recent hate crimes, whether it was a Black person who did it or not. Black people have been the target for others to attack, being told that it’s our responsibility to speak up and doing something about these crimes. There has been hatred for both minority groups, in both minority groups for a long time, which I have personally experienced and have seen. The anti-blackness and xenophobia that both groups have has sprouted from no past, history, or bad blood between the groups.

Unity between the Black and Asian community is important, since there have been tensions growing against each other. The going back and forth with blame and trying to figure out who has had it worse is exhausting and ridiculous; it’s a distraction to us all from reaching the goal of uniting together and targeting the common problems both communities face and putting an end to them.

The only way we will truly reach racial equality is if we address every group’s issues and struggles they are experiencing, not just one. We cannot pick and choose what racist actions we deem unacceptable, as they all should be unacceptable no matter who it is against. Minorities need to stand up for each other instead of pointing the finger at one another and invalidating each other’s experiences with racism.

Martin Luther King Jr.’s “Injustice anywhere is a threat to justice everywhere” quote has become a cliche, but there’s a good reason for that: it’s correct. As long as Asian Americans face racism and discrimination, we cannot solve racism and discrimination against any race. We must combat this violence – not just for Asian Americans, but for all of us.