Save the world from destruction in ‘Hyrule Warriors: Age of Calamity’ Play as popular characters in a story that takes place before the events of ‘Breath of the Wild’ 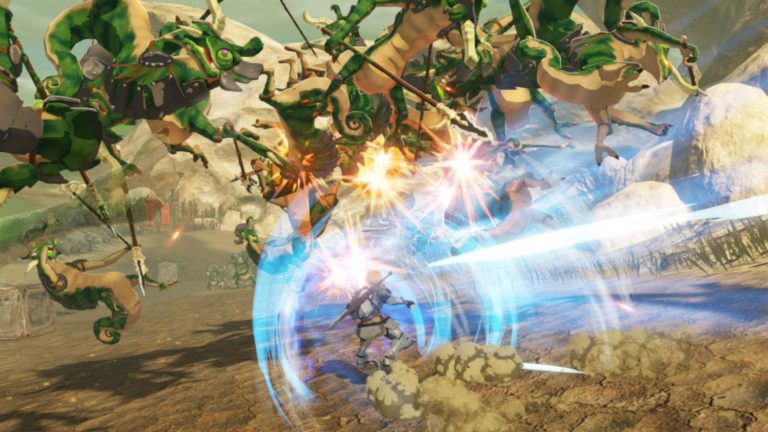 For anyone interested in the “Legend of Zelda” series, “Hyrule Warriors: Age of Calamity,” is a great game to discover more about well-loved characters and explore a combat system that is unique compared to other entries in the series.
Rating: A Photo Credit: Nintendo

The “Legend of Zelda” is a timeless video game series and in its latest entry, is collaborating with Koei Tecmo, a Japanese video game and anime holding company, to create a special hack and “slash” style of playing. In this spin-off, one must fight monsters and level up their warriors in order to prepare for the eventual return of Calamity Ganon, an evil force who will destroy Hyrule.

available only on the Nintendo Switch, what makes this entry unique is that it explores a different outcome than that of the main game, “Legend of Zelda Breath of Wild.” However, it is important to remember that “Age of Calamity” is non-canon, meaning it is not a part of the official story.

This game is fairly simple with pressing different buttons in a certain order being the main key to defeating hordes of monsters in the hopes of preventing the world from ending. “Age of Calamity” does a great job of educating players on the various button combinations people can perform and helps members by refreshing their memory frequently. All of the tips that appear throughout playing also allows getting the hang of the game a seamless experience.

As “Age of Calamity” is essentially all about combat, most of the components are pressing buttons in a certain order such as “X, X, X, X” for a particularly heavy attack or “X, Y, X, Y” for a less strong, but quicker offensive move. These combinations are a crucial part of the game as they are not only the key to defeating enemies quickly, but players can unlock even stronger combos as time goes on. Also, certain features can be performed outside of combat missions, such as acquiring different items and foods for various settlements.

One of the more remarkable features of this entry is the diversity and uniqueness of each character. None of the fighters have the same combat style which helps keep gamers entertained. For example, playing as the main character Link, will involve more sword fighting while playing as Revali, a supporting character, will involve bows and even the ability to fly. Not to mention, their special attacks all have different animations to match the personality of each character.

The best component of the game is the ability to pilot “divine beasts” which are machines that aid the main cast in their goal to protect Hyrule. Not only do they cause a lot of damage, but they allow players to perform more advanced combat moves such as throwing huge rocks of lava.

While “Age of Calamity” is enjoyable, it lacks when it comes to giving directions to characters that are not being directly controlled by the player. When a character is not being controlled, it usually stands around and barely helps, even if the player were to direct it to attack a certain enemy. The NPC, or non-player character, often takes an extremely long amount of time to accomplish the objectives it is assigned, thus almost making them useless. The non-player controlled characters could have been more proactive overall.

In all, “Hyrule Warriors: Age of Calamity” is a great game and it is worth buying especially for players who are interested in the “Legend of Zelda” series. The advanced combat system is sure to keep gamers on the edge of their seats. Additionally, the characters each have their own quirks and functionalities which provide a versatile experience.