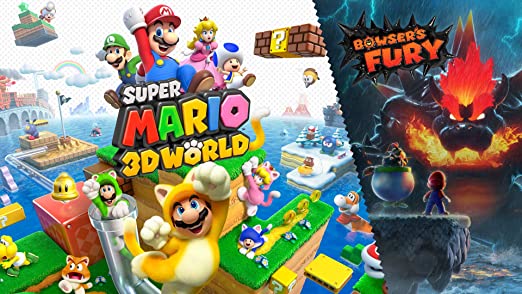 ‘Super Mario 3D World’ has been ported from the Wii U and is now on Switch alongside an entertaining additional storyline called “Bowser’s Fury.” Veterans and new players alike can both indulge in a well-loved game with some new tweaks. Rating: B- Photo Credit: Nintendo

One of the most iconic characters in gaming history is Mario, Nintendo’s staple character. Well known for stomping on goombas and saving Princess Peach from his archnemesis Bowser, “Super Mario 3D World + Bowser’s Fury,” ported from Wii U to Switch, changes up the status quo.

After years of repeatedly saving a certain damsel in distress from Bowser, Mario actually gets to work together with Princess Peach, Luigi and Toad to save various fairies known as “Sprixies” that have been trapped and displaced throughout various worlds.

Additionally, in the expansion story “Bowser’s Fury,” Mario works with Bowser Jr. for the first time to help stop Bowser who transformed into a corrupted version of himself. Teaming up with a character that is normally regarded as a villain added a twist that made the game more unique. The changes in various levels and playable characters is what makes this entry in the franchise stand out.

The mechanics of this game are like any other Mario game in which players move using the joysticks and jump on enemies to defeat them. One can also acquire power-ups such as the mushroom, fire flower and more to help out and give players new capabilities. One of the new power-ups introduced in this game is the “Super Bell” which allows Mario and company to turn into cats and climb walls. This adds a lot more mobility and definitely gives players more freedom.

One of the more notable features in both the expansion story and normal plot is that the player must collect some sort of star or token to unlock certain parts of the map, such as the different castles. Sometimes players must even traverse mazes to find these tokens. This adds an entertaining puzzle aspect to the game as it is up to gamers to find them.

Another distinctive feature of the game is all the different worlds such as the special Mushroom world that remixes previous courses and new levels which all add variety. For instance, some levels even allow players to scale waterfalls and sand dunes while riding a dinosaur-like character known as Plessie. This characteristic was entertaining and will cause gamers to anticipate and be excited about what the next level could be.

While “Super Mario 3D World + Bowser’s Fury” is a fun game, one of its main marketing points was the promise of online play and being able to play with friends on different consoles, however, there always seems to be connectivity issues. In order to access this feature, one must purchase a Nintendo Switch Online subscription, so having to constantly experience extreme lag and technical difficulties is frustrating.

Additionally, the game also lacks when it comes to challenging players. While it is understandable that Mario games aren’t designed to be hard to complete, it would be nice if players could choose from different difficulty levels so it would not feel like child’s play.

In all, “Super Mario 3D World + Bowser’s Fury” is a classic game that anyone from casual to advanced players can enjoy. Despite its shortcomings when it comes to challenging players and online play, its combination of well-known Mario elements and added twists make it enjoyable.