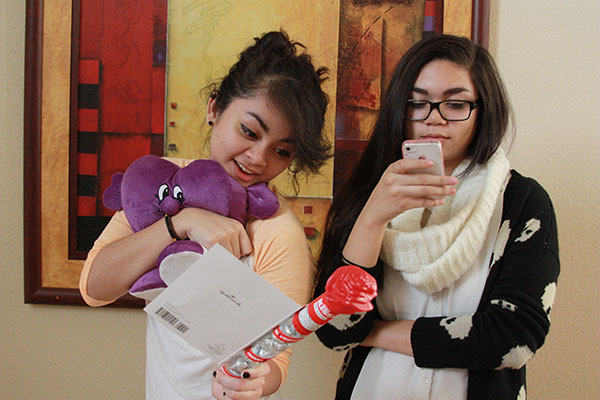 Amanda: Not really. I honestly don’t find any joy in Valentine’s Day. To me it’s just another holiday for couples to overdo PDA and flaunt their relationship. People always make it seem like a big deal, too.

Amanda: I guess you’re right in some aspect, but you would not believe the number of people that come up to me each year asking for ideas of how to get someone to be their valentine. Is having a valentine even important? What’s the big deal in asking someone to be “yours” for just one day? And if I tell them to just ask the question as is, they won’t do it. For some unknown reason there needs to be a fancy sign or a huge bouquet of roses. I don’t get it at all.

Andrea: Yeah, you wouldn’t get it. It’s not so much asking someone to be yours so much as it is just wanting them to be happy.  It’s like.. there’s a person you know, right? And you have this feeling that they might have a thing for you.  And you have a thing for them.  And you just have this idea in your head that you two could be so much happier if you were together.  It’s just . . . seeing someone else happy because of you is great. Valentine’s Day is just one of those days where you’re given some extra help for making someone happy.

Amanda: It might just be that I’m not into the whole romance-lovey-happy thing, but I am completely fine with making someone happy by telling a joke. I don’t need the lovey-dovey feeling. No thank you. Then again, I don’t have a “thing” for anyone, so. But still, you can make someone happy without having to go all out and buying a giant teddy bear and twenty roses. People just take things too far sometimes, you know?

Andrea: There’s two types of happy. There’s the kind that’s the result of a stupid joke, and there’s the kind that comes from seeing someone you like.  Yeah, the whole giant teddy bear and roses thing is a bit much, but it’s not really for attention.  It’s just “I want to show you how much I like you and this is among the only ways I can show it.” … You’ll understand when you’re older.

Amanda: Oh yeah, cause buying extravagant gifts is the only way to show your affection. I definitely can’t grasp this concept until I’m older. Anyway, another reason I’m not so keen about Valentine’s Day is probably because sometimes it seems as if the only thing my friends talk about are things like who’s in a relationship or who likes who. I mean, we totally talk about other things, but eventually the relationship topic gets old. When Valentine’s Day is around the corner, it’s like everything else is tuned out and the relationship topic is turned up to full blast. Sometimes I’d like to watch my anime without thinking about couples.

Andrea: It’s a seasonal thing.  Blame pop culture or whatever, but that’s the whole reason that couples are a huge topic right now.  It’s a little hard to not think about couples, though, because they’re everywhere.  Even in your anime. You KNOW I’m right on that because you’re always talking about how much you love Erwin and Rei. (Attack on Titan and Free! Iwatobi Swim Club) Point being, you aren’t going to be able to get away from couples. It’s a normal aspect of life and eventually, you’re going to join the bandwagon.

Amanda: Erwin and Rei are totally fabulous, thank you. Anyway, it’s true. I will never be able to escape the pull of Valentine’s Day and the relationships all around me, but hey, that doesn’t mean I have to explode with happiness when February 14 is coming near. I’ll continue to eat cheap, sugar filled, chalky candy hearts and watch my anime. Although, there is one thing I am looking forward to relating to Valentine’s Day. The chocolate sale afterwards.

Andrea: No, you don’t have to explode with happiness every time it comes around, but you should at least be more open-minded about it. If I recall the conversation we had before this, I remember lots of open negativity coming from you. Just promise me you won’t direct that negativity towards anyone on Thursday, okay? Let everyone be happy . . . and you don’t even like candy.