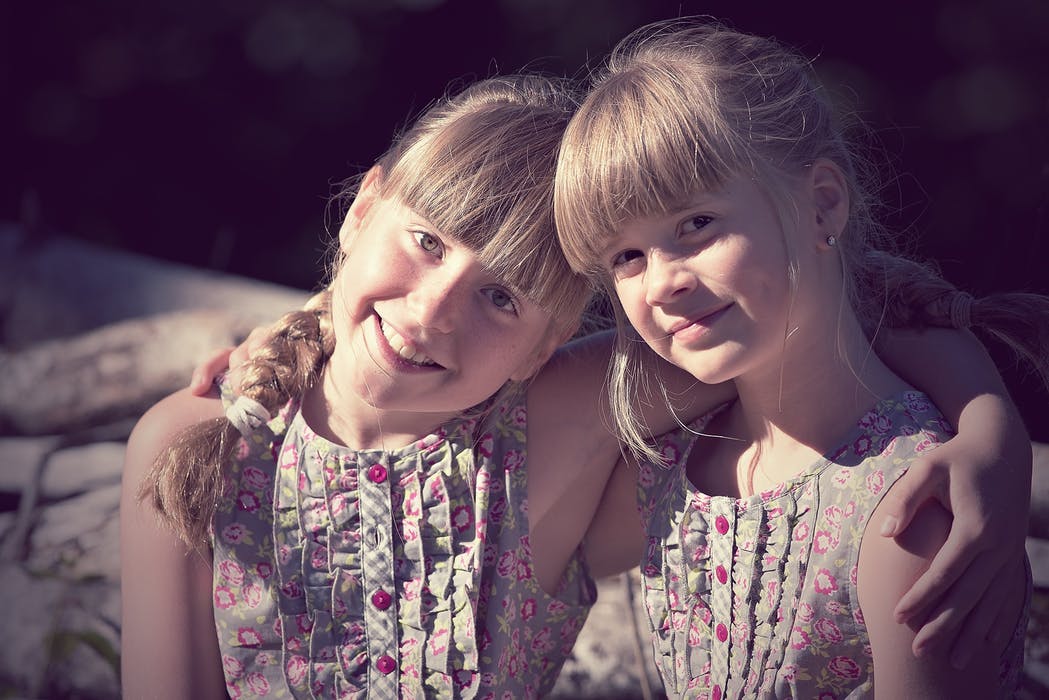 Growing and blooming together even through the harsh conditions, Denise Snow has a strong relationship with her identical twin sister. Snow shared clothes and a room with her twin sister when they were younger which helped build their healthy bond. "[My sister and I] were best friends–inseparable–you couldn’t get us apart," Snow said. "We were always together." Photo Credit: Pexel Images

Shouting and crying, a mother endures the pain of giving birth to her children. Soon after, two premature babies are handed to her. The mother names her newborns Timothy and Tiffany Chan–the first generation of twins in their bloodline.

“My mom had a lot of trouble having us physically,” junior Timothy said. “Because of [the trouble], she had to go [repeatedly] to the hospital from the early stages of pregnancy which was a big strain on [her].”

Despite the hardships that occurred during their delivery, Timothy and Tiffany currently lead healthy lives, frequently hanging out with their friends and actively participating in church.

“I think I would be more lonely [without a twin] because Timothy is always there [for me],” junior Tiffany said. “It would be more difficult on my end because I always rely on him.”

Born on the same day, people perceive twins like Timothy and Tiffany as the same person despite being separate individuals, trying to find their own path in life.

Conceiving twins naturally isn’t something that someone can simply pick and choose; it’s a rare occasion. Out of 1000 Americans born, only about 34 of them are likely to be twins.

While they are not common, there are numerous factors that can increase the chance of having twins. Black African women have a greater chance of conceiving twins, and women between their 30s and 40s tend to produce more follicle stimulating hormones, which increases the possibility of dropping more than one egg during ovulation.

Additionally, heredity can double the chance of having twins if it has happened in previous familial generations. A woman who has an identical twin has a better chance of becoming pregnant with a pair of her own; the same goes for women who have a fraternal twin.

Approximately 90 percent of people who were born at the same time as their sibling(s) are made up of either identical or fraternal twins. The other 10 percent of multiples are comprised of triplets, quadruplets and quintuplets. Along with identical and fraternal twins, there is a proposed third twin type that is still being researched.

Regardless of the type of twins they are, it is more cost-efficient for their parents when they share the same toys, clothes and supplies. That’s what seniors Jared and Justin Prescia’s parents did.

“We love the same sports, video games and movies,” Jared said. “[Since] we like the same things, if one of us asks for a gift, the other can use it.”

Looking in the mirror

Standing across from a mirror, their stares transfer back and forth between each other’s reflection. Arguing over who the more attractive twin is, sophomores Alex and David Villarosa both claim they have better genes despite appearing nearly identical.

“When my brother and I would fight, it would go from just smack talking each other, then to yelling and finally to punching or wrestling sometimes,” said Alex. “After we fight or if our mom comes to see what’s happening, we’ll just stop and act like nothing ever happened.”

Walking through the mall aware of strangers’ gazes, Alex hopes nobody will go up to him and David to ask a question about having an identical twin. As identical twins, Alex and David regularly get asked questions whenever they go out.

“Some things that Alex or I or even sometimes my parents get asked is ‘What’s the difference between you two?’ or ‘Do you guys ever do anything different to look somewhat different from each other?’” David said.

“Our mom always dressed me in yellow and [my sister] in pink for years until we were around four-years-old or until we could really talk,” Snow said. “She left our hospital bracelets on our wrists until they were too tight which meant that we had them on until we were a little over one-year-old.”

As identical twins, Snow and her sister would play pranks on their family, friends and even their teachers.

“[Being a twin never bothered us] because we actually found it fun to be a bit different,” Snow said. “Yes, we’ve tried switching classes once–it didn’t work. [We got caught] and my teacher pulled me by the ear and said, ‘This is not your classroom!’ I was in third grade.”

Despite the close similarities in appearance, there is not much that sets identical twins apart from siblings of different ages.

“Yes, we may have some similarities, but [David] just feels like a normal brother to me,” Alex said. “If you think about it, it’s kind of [crazy having a twin] because we essentially are the same person but are different in a lot of ways.”

Timothy is a boy. He is taller, he regularly wears glasses and his voice is deeper. Tiffany is a girl. She is a tad bit shorter, she often wears contacts and her hair is longer. Despite the difference in physical characteristics, many people still mistake them for one another.

Ironically, despite the fact that they are fraternal and of the opposite gender, family members weren’t even able to differentiate between Timothy and Tiffany when they were younger.

“When we were little, me and Timmy sounded like each other,” Tiffany said. “Whenever someone would call us over the phone, they would think I was Tim and [Tim] was me.”

Although they may look similar, they are not identical. Regardless, many still tend to mistake fraternal twins for one another. Accustomed to others’ confusion, Jared and Justin are an example of fraternal twins who learned to let the mistakes slide.

“The only thing I can remember in past years of school is that teachers called us the opposite name, but we’d still respond as if they were right,” Jared said.

While the Prescia twins often spend time together, they still have contrasting personalities that set them apart from each other.

“I’m more outgoing, while Jared’s shy,” Justin said. “[People used to say] that we were loners who need each other. Now they love us.”

However, with competitions aside, Timothy and Tiffany help each other in topics one may be weak in, but the other is stronger with. More proficient in math, Timothy helps Tiffany understand concepts that she can’t grasp; in return, Tiffany shares her Anatomy notes with her brother.

“Timmy always [makes food] for me because I can’t cook, and I guess that’s how he shows his appreciation,” Tiffany said. “He struggles a lot because he’s always worried about his position as a kids worship administrator at church. I hype him up [to encourage him] and tell him what I think about the team and his place with God.”

The Chan twins believe that college will help them mature and argue less often. Tiffany plans to study out of state for med school, and Timothy is looking into California schools for sound engineering. Meanwhile, Jared and Justin will be attending the same school and don’t believe there will be a change in their sibling bond.

“The best way I can describe our relationship is living with your best friend,” Jared said.

From “The Parent Trap” to “It Takes Two,” the phenomenon known as “twintuition,” also called twin telepathy, exists throughout several films and is commonly thought to exist between real life twins.

While Jared and Justin cannot guarantee the existence of twintuition, they believe that they share a similar special connection when playing sports.

“We know where [the other person is when we play soccer] and we work well together,” Jared said. “In freshman year, I played varsity without him, [but] I didn’t feel as good because I don’t play as well with other people.”

“Sometimes we’ll say the same thing at the same time on accident or without even planning it,” Mariah said. “One time we were eating Skittles and we both kept grabbing the same color out every time.”

However, not all twins believe they share a connection similar to twintuition. Timothy and Tiffany don’t experience instances like reading each other’s minds or moving their right arms at the same time.

“When most people hear that we are twins, [they] are so surprised and the next thing they say is, ‘Do you have twin telepathy?’,” Timothy said. “I guess being a twin is something very uncommon and I never really thought of it that way.”

One thing that separates Timothy and Tiffany from each other is their habits and skillset. While Timothy likes watching anime, Tiffany is more interested in Korean dramas.

“Another trait we don’t share is our speaking skills,” Timothy said. “I tend to be a louder speaker, but my sister thinks a lot of what she says to make sure everyone is respected.”

Life without their other half

Born together, raised together and, in some cases, looking nearly identical to each other is an aspect of life that many other siblings cannot relate to. The connection that twins share as they grow up together is unique compared to the relationships that others have with siblings of different ages.

Snow finds it difficult to envision life without a twin. Bonding through shared hardships and laughs, they believe that they are sisters by chance and best friends by choice.

“I’m not sure if I’d be who I am [without my sister] because she’s the one who helped me evolve into the person I came to be and made me more curious about things like science and math,” Snow said. “That’s why I got into computers–she was into it, and that’s why I ended up becoming a computer teacher.”

Arguments, jam sessions and heartfelt moments–the bond that the Chan twins share is one that cannot be easily broken. Despite the different career paths that they wish to pursue, Timothy and Tiffany believe they’ll remain connected spiritually.

“My sister is the most beautiful and radiant girl,” Timothy said. “I know that when she grows up and marries someone, he will be the luckiest man alive. My sister deserves the best in everything and I’m so proud of the amazing person she is. I don’t tell her I love her a lot, but I truly do and I always will.”