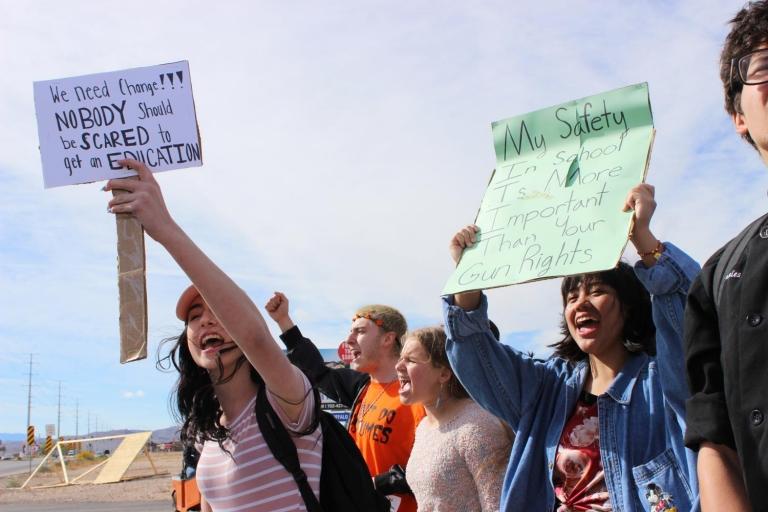 Shouting, “Never again,” junior Andi Maddera and sophomore Ghyanni Ferraer hold up signs. Schools nationwide participated in a walk-out in demand for gun reform. “We shouldn’t be afraid to go to school,” sophomore Ariana San Juan said. “We need to show people that we are here and we won’t stop until there are changes made.” Photo Credit: Shareen Basyari

To protest against gun violence, students and teachers stood at the Rainbow Blvd. and Shelbourne Ave. crossroad with signs while chanting, “Never again.”

“I’ve cried too many times over this event,” senior Nathan Rightman said. “Something needs to be done, and if this is the only way then I’m going to do it. You don’t know what change is until you do something about it.”

After the shooting at Marjory Stoneman Douglas High School in Parkland, Florida, there has been a higher demand for gun reform. Today’s protest took place nationwide for 17 minutes, starting at 10:00 a.m..

“People keep saying that young people are going to change the world, and I want to do that,” junior Kendra Salcedo said. “I’m glad my school is letting me [stand up for what I believe in].”

Some teachers did not participate in the protest since classes were in session. However, Graphic Design teacher Debby Tommy and Spanish teacher Geri Barnish were the only teachers who joined the walk-out during their 30-minute duty-free lunch break.

“I am here because I was teaching class on December 12, 2012 when 26 elementary schoolers and teachers were murdered,” Barnish said. “There’s gotta be a point in time when [recognize the] research that shows it’s not an issue of mental illness–it’s an issue of guns that are in the wrong hands.”

Unwilling to risk the chances of getting marked absent or missing lessons, some students who wanted to participate in the protest stayed in class.

Simultaneously, there were both students and teachers who disagreed to protest against gun violence.

“I won’t be participating in the walkout because I don’t see what [will be accomplished],” freshman Cameron Chao said. “[When it comes to the discussion about guns,] I feel like Americans have the right to bear arms; it’s in the Second Amendment. Banning AR-15s won’t do anything since there’s tons of other rifles that can do more damage.”