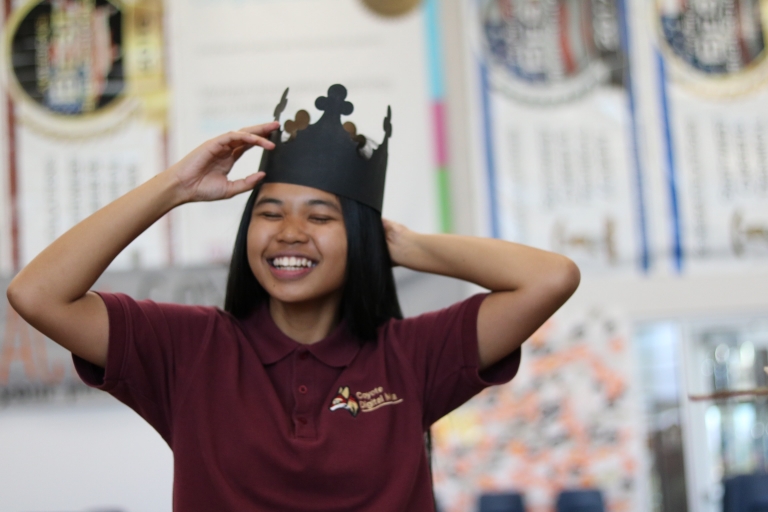 Testing out the sizes, senior Casey Joseph attends the senior crown making party. The senior class chose ‘See You Again’ by Tyler the Creator as their senior song. “Out of the options given to us I liked ‘See You Again’,” Joseph said. “Tyler’s an artist a lot of our generation is into right now and the song directly states ‘20/20 vision,’ it’s almost a given that that would be our senior song.” Photo Credit: Eriyale Williams

As seniors approach their graduation date, ‘See You Again’ by Tyler the Creator was voted the official senior song.

“I chose ‘See You Again’ by Tyler the Creator as our senior song because he’s actually an artist that I listen to,” senior Maya Negash said. “I wasn’t a fan of the other songs that were chosen and thought that ‘See You Again’ would be a good choice because it is more modern.”

The other song options that were available to choose from were ‘Don’t Stop Me Now’ by Queen, ‘Good Riddance (Time of Your Life)’ by Green Day and ‘Nobody Knows’ by the Lumineers.

“I voted for ‘Don’t Stop Me Now’ because it was fun and upbeat,” senior Allyana Gorospe said. “I didn’t vote for ‘See You Again’ because I didn’t like the beat or the singing.”

Previous class songs include ‘Young, Dumb and Broke’ by Khalid and ‘Youth’ by Troye Sivan.

“I feel like people only chose it because it had our graduation year, but I think we could have chosen songs that we grew up on,” senior Cyncir Pollard said. “I voted for it out of the top four, because I didn’t know the others as well and I didn’t like them as much when I listened to them.”

The class song will be played at the senior sendoff assembly and at graduation.

“I think the song fits us well, it matches our energy as a class,” senior Jennifer Shelley said. “The chorus goes well with us too, since after we leave high school, we might never see these people again, so I like the choice.”