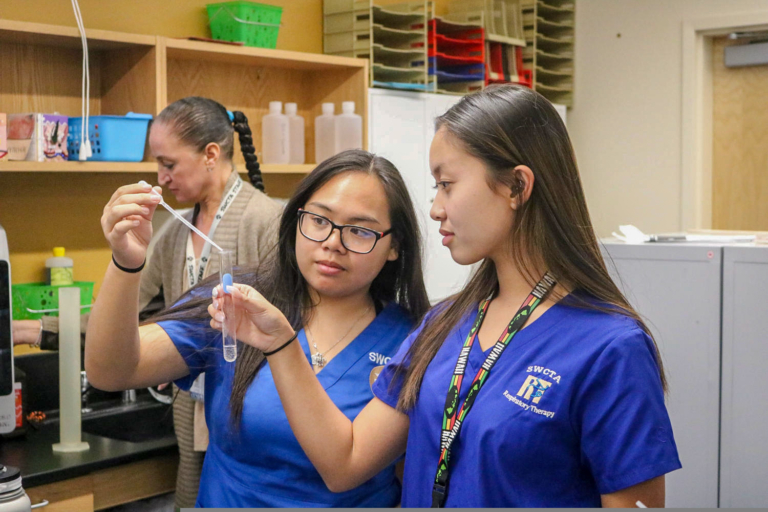 Mixing the contents in the tube, juniors Nicollette Tolentino and Angelica Pangan inspect the newly formed bubbles. Students created their own labs that assessed the affect of salt and bubbles. “I feel this project will effectively show the effects of substrate changes which in turn helps us understand the unit,” Tolentino said. Photo Credit: Cosette Zielinski

To learn about the enzymes in proteins, juniors and seniors in Ms. Mary Breslin’s AP Biology class are creating a hypothesis and preforming a lab around it. This is the first time the students have conducted their own experiment in the classroom.

“Part of AP Biology is for [students] to do inquiry-based science and ask their own questions,” Breslin said. “They must know how to collect and display data, then present it as well. AP Biology is an introductory course that would mimic what they would see in a college class, so I hope this specific lab will introduce students to what they will be doing in college and in the workforce.”

Instead of being given a pre-set lab in which instructions are provided, the students have more freedom of being able to choose the variable they experiment, such as temperature selection and salinity of the water.

“I am very interested in this project because I’ve never had the chance to design a project where I could give my input and make my own [personal lab]” junior Isabella Saucedo said. “I’m also excited to learn in a more interactive way instead of completing book work.”

Students were assigned different roles in teams of four. The roles are recording data, controlling the variables, counting bubbles and timing the experiment.

“We conducted an experiment to show how catalyses [are] able to speed up the breakdown of hydrogen peroxide,” junior Alexandra Veleva said. “We used a graduated cylinder submerged in water and a test tube [and measured] the rate of the bubbles going up the tub. I believe this will help me understand how enzymes function as biological catalysts in our body.”

Once the students completed the lab, they finished by charting their individual and class data. Whether or not the students’ experiments succeeded or not, more labs similar to this one will be carried out in the future.

“The hardest part for students doing this lab is the constraints involved,” Breslin said. “Even though their constraints are very clear, they have to figure out how to create a lab following their personal education. Most students are used to being given a lab where the directions are written out and having more free will in a science class.”