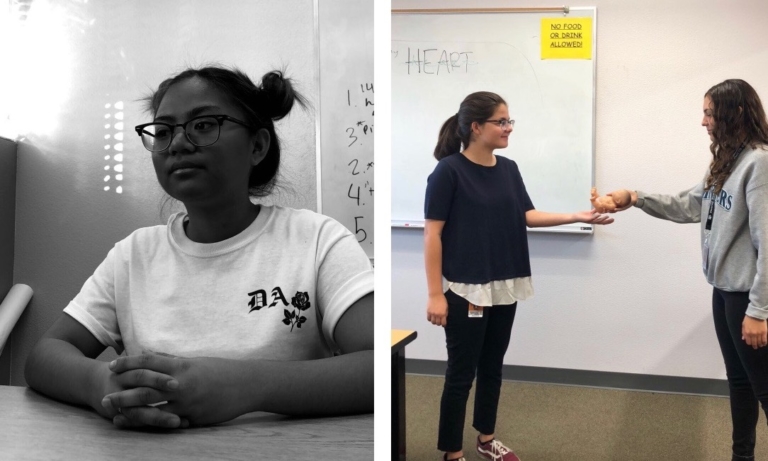 Explaining a character’s storyline, juniors Kathrina Bornios, McKenna Thayer and Bailey Deresz show their interpretation of the court case. Students created videos and photos to meet the requirements. “We only had a single class period to work on this project," Bornios said. "Yet we got it done efficiently and it was pretty interesting to see how creative we could get with it.” Photo Courtesy of Noel Sarte-Saad

To make sure her students have a clear understanding of what happened in Act II of The Crucible, English 11 teacher Mrs. Laura Penrod assigned a project that required groups to make a Snapchat stories of the act.

“I wanted to use Snapchat because I figured most of my students already have the app and understand how to use it,” Penrod said. “Personally, I love using the app because it’s an easy way to show anything.”

The main objective was to cover four different topics from the overall play that would be well-rehearsed, accurate and detailed. Students were allowed to use text and emoji features to enhance their videos and pictures.

“I think that the project was an overall enjoyable experience because it was different compared to the other serious projects that come with my classes,” junior Eldina Mrkulic. “I appreciate the freedom and modern approach to this project and I enjoyed that the assignment was based around something that our generation is familiar with.”

Although the assignment is only based off of one character’s experience, the snaps were recorded from any perspective and had to include the five required characters. Each group followed the same script, but interpreted the ideas differently.

“This project really opened up a new way of explaining a story,” junior Presiosa Prieto said. “I love how we weren’t limited to what we could use and were even allowed to use the funny features of the app.”

Students were only given one class to create their snaps. Which were then presented as Snapchat stories and they were required to explain how their photo or video related to the play.

“Some were confused and some events got added into their snaps that can only be assumed,” Penrod said. “But either way, they all significantly did well.”