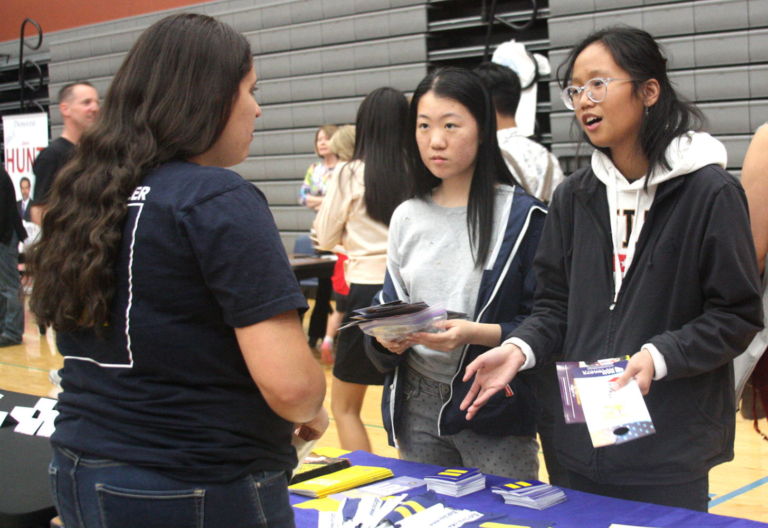 To learn more about a candidate, seniors Remy Leung and Franchesca Fajardo ask questions at last year's Candidate Night. This event gave students the opportunity to register to vote and meet the leaders that they will be voting for. “I believe that everyone should attend.” senior Min Kang said. Photo Credit: Kenneth Talusan

Upon receiving invites from students in U.S. Government and Politics teachers Joseph Juliano and Adam Cegavske, over 50 candidates that were invited have confirmed their attendance for candidate night next Thursday.

“The purpose of Candidate Night is to get the senior class government students to understand the importance of elections, actually take the time to educate themselves on who is running and make a good decision on who to vote for,” Juliano said. “[This allows students to not be] so intimidated on how they think about participating in politics and how they think anyone that wants to get involved can.”

Students that will be turning 18 before the next election and have a Nevada issued identification card are eligible to register to vote at Candidate Night. Anyone attending will be able to meet candidates from the upcoming November election and ask them questions. Only candidates running in the general election will be in attendance.

“It’s important to go to Candidate Night because as citizens, it is our civic duty in a democracy to learn about the people running for office,” senior Ally Chan said. “We are the future, therefore we should elect the most eligible candidate to represent us.”

The event will last from 6 p.m. – 7:30 p.m. Clubs will also be selling concessions during the event.

All students, especially seniors, are encouraged to attend the event.

“It provides the human-to-human interaction that TV ads, billboards, and rallies overlook,” Kang said. “It gives people the chance to talk to other people in the community and to voice their opinions with their representatives, which is extremely important. I’m going because I know that this election is of extreme importance and given that these elected officials will represent us as Nevadans and Americans, I want to help build a better connection between the people and their representatives.”