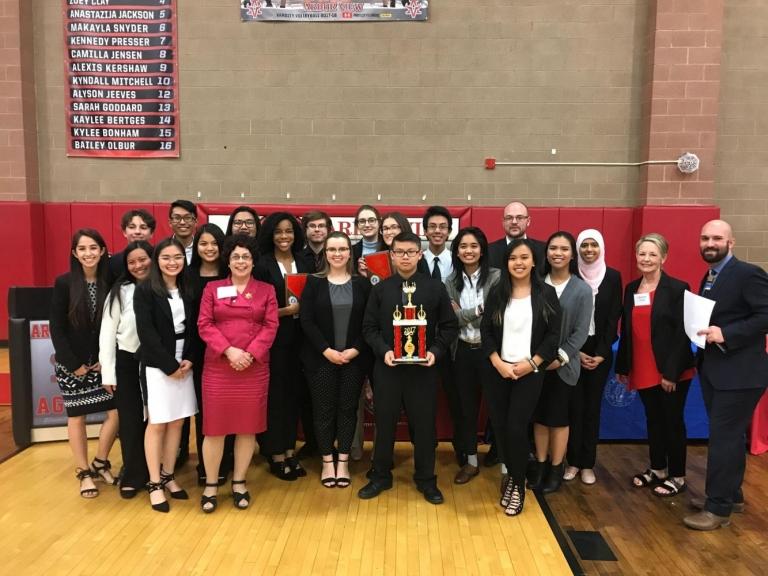 After waiting an extra hour for the scores to be finalized, Mr. Joseph Juliano’s We The People team is named second place for District Three. At the district competition in November, 18 students in AP Government presented a four-minute speech and answered six minutes worth of follow-up questions. “District competition went really well considering our school won three out of six unit awards,” senior Hannah Jane Romero said. “[Unit 4] only lost by a mere six points, which was a surprise since we got amazing feedback from our judges.” Photo Credit: Lauryn Kern

After a month and a half of steady preparation for the state competition, seniors participating in the We The People program are heading to Reno to compete against eight other schools for a chance to attend nationals.

“I was honestly so excited and happy to find out that we were going to state, I started crying tears of joy,” senior Hannah Jane Romero said. “I was so glad my time after school was worth it.”

Divided into six units that focus on different aspects of the government, students have prepared three four-minute speeches in response to state hearing questions. After presenting the speeches, there will be a six minute follow-up session in which the judges ask the unit questions based off of their speech.

“I expect state to be a little more intense than out district competition,” senior Jayla Hart said. “This year we are presenting two of our speeches instead of one, so we have more to think about and analyze.”

Despite winning second place at the district competition in November, seniors were named a “wild card,” meaning they can attend the state competition because of how highly they scored.

“From state, I expect to learn a lot about myself and how I work under pressure and with the team,” senior Grace Lange said. “I sincerely hope that our team as a whole does really well and that we are able to make it to nationals. I know our unit has spent hours upon hours preparing for this, so I feel prepared.”

Each student paid $150 for the trip, but Juliano hopes to hold fundraisers after the competition to reimburse the costs. The other schools attending from southern Nevada include: Canyon Springs High School, WCTA, CSN-East, and Ed W. Clark High School.

“Every year my expectation is to get to state,” AP Government teacher Joseph Juliano said. “We want to be among the best and we accomplished that goal this year. Our goal is to try and place in the top three. If we can get a trophy for second or third place, it means that we had pretty strong scores and it always ends up pretty close.”