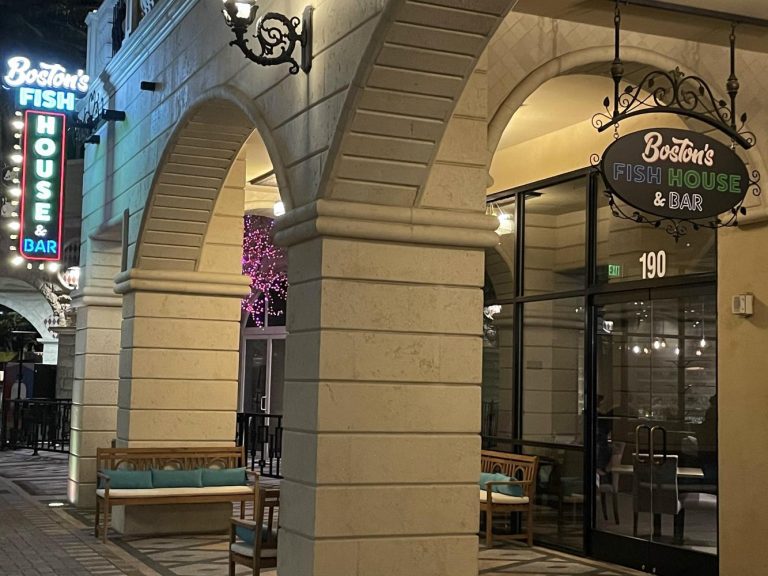 Located in Trivoli Village, this seafood establishment delivers on the flavor of several different seafood dishes while contributing special seasonings that’ll leave the customer wanting more. With their mix of various traditional sea cuisines and classic Eastern-coast foods, the pairing is something that everyone should try.
Rating: A Photo Credit: Aila Pasic

New England cuisines are a staple of American foods, but more specifically their East Coast classic seafood. Boston Fish House & Bar has numerous menu items that take the concept of New England cuisines and add their own twist by not only offering traditional seafood dishes, like Fish and Chips or a Waldorf Salad but also creating their own unique dishes, like their Seafood Fettuccine and Shrimp Ravioli.

This restaurant offers guests the view inside their open kitchen format to observe the fresh catches which then turn into their dishes, created by head Chef Francesco De Furia. Furia has an extensive background in the cooking industry, owning both his own restaurant and catering company.

Because of COVID-19, reservations have to be made in order to eat at the restaurant. As my family and I walked in, we saw right away that the staff was following COVID-19 precautions by wearing masks. Along with that, the staff was invaluable and patient as my family asked for recommendations, as well as what ingredients were in certain dishes. In terms of wait times, It was surprising to us how fast the food was able to get delivered to our table after we ordered appetizers and entrees.

The first items we ordered were the appetizers: Mediterranean Calamari ($15.99) and Fried Jumbo Shrimp ($14.99). As someone who isn’t a fan of seafood, I was impressed with how decent the appetizers were. I was impressed that the calamari wasn’t cooked as you typically assume, fried.  It was actually grilled and served with black olives and a spicy, one-of-a-kind marinara sauce. I was more curious about how the calamari would taste, since I’ve only seen restaurants serve fried calamari, and I was pleasantly surprised. It was tasty up until I realized how dense it was, and then it started to feel like I was chewing on rubber. However, the spicy marinara took that thought away and altogether made the appetizer an all-around great start to my dinner.

For the second appetizer, the fried jumbo shrimp wasn’t as impressive, since it didn’t have the same flavor and was altogether quite bland compared to the calamari. It lacked seasoning and came with a typical marinara sauce for dipping. The chips that were served alongside them were also bland. Despite the jumbo shrimp not tasting as great as the calamari, it’s something that I wouldn’t order for an appetizer. However, if it’s your first time, getting the calamari as an appetizer is the best option.

The second item that we ordered was the Octopus Salad ($16.99). Trying this salad was shocking for me, as the salad came with mixed greens, tomatoes, and two octopus tentacles. I was stunned at how nicely the octopus came out since it can be challenging for many to cook octopus correctly. This salad tasted great, with the octopus slightly covered in balsamic vinegar sauce and with a touch of lemon, which tied the whole dish together. The salad looked small but was honestly filling and I highly recommend both seafood and non-seafood lovers to try this salad amongst their several other options.

The Grilled Seafood Plate ($41.99) was the last dish we ordered for our main course. It consisted of shrimp, scallops, smoked salmon, baked potatoes, and a side of our choosing and in this case, we chose asparagus. The other available sides are various vegetables, steak, Tuscan fries, Boston chips, or a side salad. The overall platter tasted amazing with all the various different types of seafood. There were no flaws with any of the seafood items, and a highlight was the perfectly cooked scallops and butter lemon dressing. The platter was enough for two people to share. And even though the price for this dish is quite high for a casual dining restaurant, the food justifies the cost.

The restaurant is impressive when compared to other popular seafood restaurant chains, like Long John Silvers, Boiling Crab, and Red Lobster. The restaurant is a casual dining place like the others, but Boston Fish House & Bar seems fancier with their exceptional staff, minimal decorations, and variety of seafood that the other food chains can’t compete with.