The horror to not celebrate Halloween 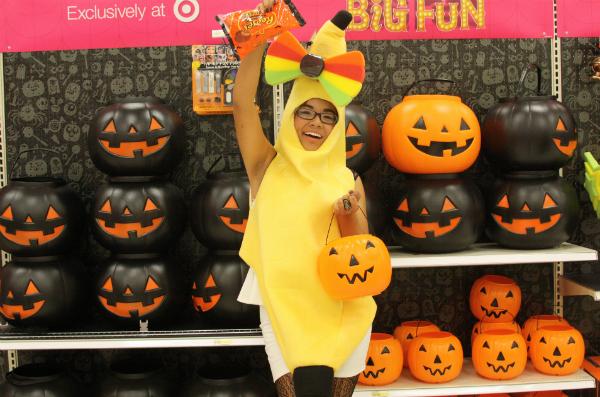 Celebrating Halloween should not mean to give up any chance of dressing up and being given candy. It should be about the fun and entertainment you feel, no matter how childish it seems to others. Photo credit: Brittnie Truax

“Hey, you wanna come with me to the costume store to pick out something for trick-or-treating on Halloween?”

“You’re in high school, why would you dress up and go door to door for candy? Don’t you think you’re a little old for that?”

This conversation has grown all too common around the month of October.

While stores start to add Halloween costumes to their floor setups, teenagers are faced with the pressures that involve celebrating the festive holiday. It is a struggle to decide if you want to go door to door as a cliche witch in hopes of treats rather than tricks or sit inside and wait impatiently for the holiday to end.

Personally, I see Halloween as one of those holidays that should be observed by everybody, regardless of their age, race or anything that sets them apart from one another. The level of fun should never cease to exist just because you feel too old. In fact, that is the one reason that makes Halloween my favorite, despite my fear of the masked murderer masks that fill the dark night.

It is timeless fun to prepare for the last night of October. Figuring out what abnormal character to be from American Horror Story: Freakshow or what profession’s uniform to add pizzaz to is always the fun part of planning out a costume. The world is your oyster, filled with so many costume choices to choose from. Whether they are bought prepackaged or completely DIY, every costume has something unique to it. The twist of adding homemade (instead of store-bought) blood to one’s face displays the inner creativity that I wish was seen in everyday attire. Of course, the steps in making the ensemble as spooky or cute as possible are just as fun.

[vision_pullquote style=”3″ align=””] “Most are pretty familiar with the childhood memory of going door to door with a parent or older sibling dressed in a flamboyant pumpkin costume, and barely being able to spit out the words “TRICK OR TREAT!” to the neighbors.” [/vision_pullquote]

Some look forward to dressing up on this one day each year and letting all their creative outlets shine, forgetting about the days of sporting “Average Joe” attire. It is also viewed as a childish practice to wear cheap white makeup that will sweat off after two hours and cheaply-made clothing in hopes of resembling a zombie. But why does it seem so odd to dress up during the other 364 days of the year?

Alongside that, not only does dressing up put people on such a low pedestal, but trick or treating and asking for candy is considered to be just as childish and immature. Most are pretty familiar with the childhood memory of going door to door with a parent or older sibling dressed in a flamboyant pumpkin costume, and barely being able to spit out the words “TRICK OR TREAT!” to their neighbors. For only three words, it was such a joy to be given candy and sweets that would result in major stomach aches that lasted for a few days after. However, age has brought on a sense of feeling “too cool” for candy.

The argument that stands is that candy can easily be bought from the store rather than asking for handfuls from strangers. Worried souls fear the chance of disease from slightly unwrapped bubblegum that lasts for six and a half seconds of chewing. However, candy provides timeless fun for people of all ages and is not all that dangerous as some would think (but just be careful with anything you believe is suspect – be cautious). It is pure entertainment to receive mixtures of fun-sized candies that can cure any sweet tooth and be traded amongst friends for certain favorites.

There will come a point in our lives where we will encounter the adult world as independent and mature beings. Halloween will not always be a night with friends and dressing in the craziest clothing and fake blood. Eventually, it will become a night spent working for our paychecks or taking our own little ones out to experience the fun it once brought for us.

Rather than marking it as a day to only be celebrated by those 12 and younger, enjoy your youth and involve yourself in the silliest ways to celebrate the holiday while you can. Go against those who carry an opposite opinion towards the means of honoring the holiday and celebrate in the way that is most comfortable.