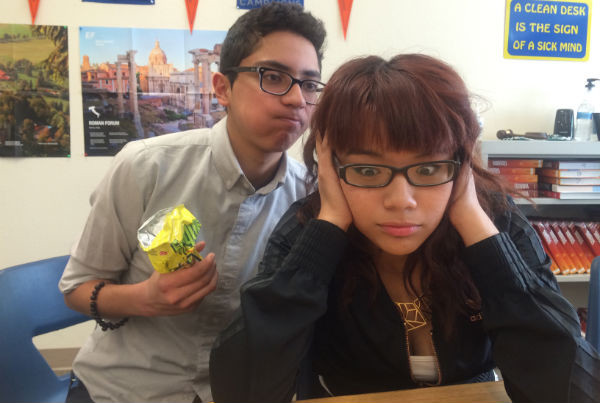 Annoyance eventually reaches a tolerance that can no longer be handled.
Photo Credit: Danialle Frahm

Do you ever have one of those days where there’s a need to hate everything and everyone, mostly peers? The level of anger builds up, leading to flying off the handle from any kind of bothersome activity, like coughing without any mouth covering. I’m pretty sure as you’re reading this a previous situation involving an annoying peer is now popping into your mind.

(Readers, prepare for this to be a column of ventilation, so leave this story now to escape any words of bitterness and complaint.)

Annoyance, what is it? Is it sitting in a library, expecting some silence and a calming environment to focus, and instead hearing someone’s loud conversation on the phone as they rustle through a bag of chips? Or, is it the unbearable sight of a classmate coming to school or work with damp, wet hair? To me, it’s when a peer doesn’t know when to stop and continuously commits annoying acts that affect everyone within their surroundings, such as not respecting privacy, eavesdropping, oh and the constant complaining of “too much work,” just to name a few.

[vision_pullquote style=”1″ align=””] “I can’t tell if I’ve just been a Sour Sally lately, or if these irritating acts have really reached my limits.” [/vision_pullquote]

I can just hear the loud whispers of these people, telling the deepest secrets to the next friend they see in the hallway. Then I think to myself, “Why did you trust your secret with that person?” They’re the type to give the dirtiest glares in their direction and being left in a state of confusion to determine if it was directed towards them. Worst of all, manners don’t exist in these people’s dictionary; hold a door open and there’s no thank you heard because they feel the need to go before anyone else. The impoliteness never stops!

I can’t tell if I’ve just been a Sour Sally lately, or if I have reached my limit. Based on other’s opinions, I’m sure it’s the latter.

By now, I think the simple, while not easy, solution is to cut off ties with those people. While it will be awkward to ignore these individuals as they make attempts to communicate, the end result will be worth it. Everyone will be saved from a ton of stress away from these individuals and maybe it’ll teach them “Hey, your annoyance is starting to get a bit out of hand. You need to change these habits before everyone else starts to react.”

Dealing with annoyance isn’t healthy and once a level of it has been reached, it can turn pretty ugly, so it’s best to take care of it while still calm.