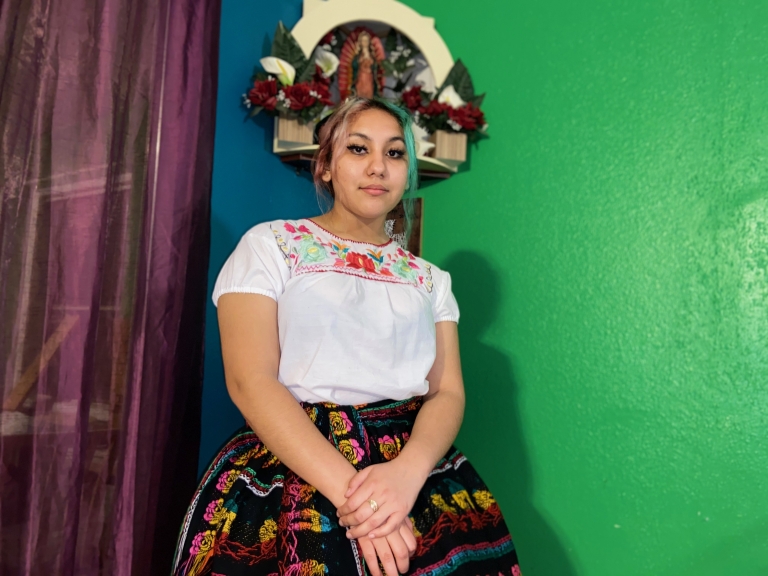 In order to embrace her culture, sophomore Alex Espinoza tries on traditional Mexican clothing. “The top I’m wearing is a traditional shirt that women wear day-to-day,” Espinoza said. “My skirt is used for everyday wear, traditional dances and the attire of a girl in mariachi.”Photo Credit: Alex Espinoza

She hears her mom call her name and eagerly runs down the stairs. Her mom invites her to help her fry tortillas for dinner. As she places the tortilla onto the skillet, she hears the simmering and popping of the oil.

Growing up in a traditional Mexican household, sophomore Alex Espinoza was influenced by her culture from a young age.

“My parents are from Mexico and they didn’t want [me] to forget [my] culture,” Espinoza said. “They wanted to show me the beauty of it all.”

Espinoza was exposed to traditional foods and clothing growing up. She was also taught traditional dances including Folclorico and Jarabe Tapatio, a hat dance that originated in Jalisco, Mexico.

“About a year ago I remember performing a folclorico piece at church for a spring event,” Espinoza said. “It felt great to feel all the energy from the performers and hear the cheers from the audience. I absolutely loved everything about it.”

“I think that certain pieces of clothing are very important in my culture because the piece has so much history and holds so many emotions that were carried by our ancestors,” Espinoza said. “My favorite piece is the traditional shoes because they go with anything and look really good.”

While wearing these traditional clothing pieces, Espinoza receives a lot of support, but also a lot of criticism.

“There are many people that say that I shouldn’t be wearing those things and there are others that love it and praise me for it,” Espinoza said. “When people do tell me such vulgar things, I do get discouraged, but I remember it doesn’t matter what they have to say. I tell them I respect them, but I won’t change. When people praise me for it, I get a feeling of warmth and thank them for their kind words.”

Espinoza also makes authentic Mexican dishes for herself and her family every night. She brings these dishes to school for lunch everyday to share with friends, including quesadillas, enchiladas, tamales and pozole.

“In eighth grade I had a friend who only knew the basics of mexican food, so I showed her the traditional dish Menudo,” Espinoza said. “She was surprised and told me she enjoyed the dish. It felt great knowing I introduced her to a part of my culture because she could see the beautiful history behind the people which is opposite of what the media usually portrays.”

Espinoza hopes to grow even closer with her culture and spread her traditions to others.