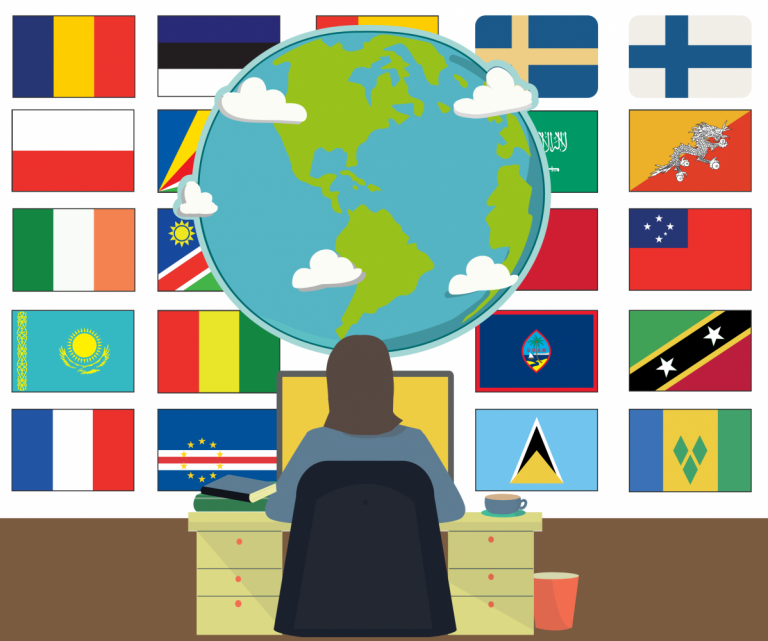 Through the computers on their desks, students in Kelly's AP Human Geography class start a new unit about culture. Students, such as sophomore Gia Choong, are learning about all the different cultures of the world. “I’m definitely the most interested in learning about religion,” Choong said. “I’m not theistic at all, however, I’d love to learn more about the role it plays in different cultures and how that translates to the idea of secularism in different governments.” Photo Credit: Kayla Thomas

As sophomores progress through the second quarter, students in Jessica Kelly’s AP Human Geography class are beginning a new unit on culture. While studying the concentrated subject, students will learn about the development and elements of culture, as well as the ethnic landscapes.

“It’s important to learn about different cultures so that we’ll become better people and have a better understanding of how and why people do what they do,” Kelly said. “Not only that, but where people do it because it’s geography.”

Beginning on Nov. 16, students will start off the unit with a lecture about cultural appreciation and appropriation. They’ll be discussing the differences between the two and how cultural appropriation is used to gain attention and money.

“We learned about religion and where it came from,” Kelly said. “Now we’re asking what it means, why does that matter, and why did some religions start in certain places? [Then] a huge part of this unit is about cultural diffusion, which is like [culture] going from one place to the other.”

Since it is an advanced placement class, new topics are very detailed due to the amount of material covered. Through Kelly’s teaching interactive methods, she’s been able to cover all different cultural perspectives, helping students understand the new unit.

“I feel like Kelly is a teacher who’s more connected to her students than the average teacher,” sophomore Gia Choong said. “She knows how to engage them, and more importantly she knows how to keep them interested over a long period of time. When it comes to learning about something like culture, it’s a more personal topic, so I have no doubt that she’ll try to incorporate us and our experiences into it.”

The culture unit is set to go on until the end of the first semester, making for one of the shortest sections of the course. Because of the rapidity of such a dense unit, it’ll end without a unit test, but there will be questions on the subject in the semester exam.

Planning out several different activities for the students to participate in, Kelly has found multiple that pertain to each of the subtopics of culture such as language stations, interactive maps, and more.

“We’re doing this folk versus pop culture board sort, which is an activity that somebody created so that kids can categorize folk and pop songs,” Kelly said. “It looks really cool, and it helps students understand the difference between folk and pop culture.”

Outside of the planned activities, students will learn about topics that are more about themselves.

“I’m Vietnamese and Filipino and I don’t have much information on either culture,” sophomore Anthony Pham said. “I truly want to grasp how my people live, and simple things like the food they like to eat, and even the games they like to play. I want to learn specific things about my culture so that I can possibly adapt to the way my people live.”

With all of the topics that Kelly will teach in class, students will learn a lot. Whether it be about other cultural experiences or the influences on cultures around the world.

“People learn more about themselves through learning about the human experience in general,” Kelly said. “Learning that we can have connections to things that are so foreign to us, like things that we don’t know anything about. I think it just makes people better, and overall more compassionate, understanding human beings.”

Could not load the poll.