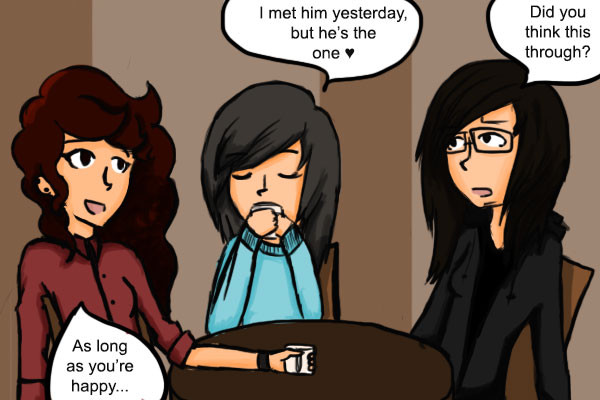 Do you like to rush into the relationship or do you prefer to take it slow?
Photo Illustration: Amanda Galvan

Andrea: Being in a relationship is nice.  There’s someone else outside of your family and friends that you can talk to who’ll listen, etc. Plus, it’s cool knowing there’s someone you like who likes you back.

Amanda: Relationships are pretty cool. The only downside would be that sometimes people are so focused on getting into one they rush everything and mess it all up. If you wanna have a successful relationship, at least ease into it.

Andrea: That has happened plenty of times to several people I know/know of.  It’s mostly about when you’re with that person, though. It’s like . . . you’re happy. They’re happy. And you’re the reason they’re happy. It’s such a strange phenomenon, but it’s . . . it’s nice. That’s why people rush into relationships. You just want to that person to be happy all the time.

Amanda: Yeah, yeah, happiness, I won’t understand until I’m older. You covered all that already. You do know that it’s the rushing into it that causes relationships to fail. I can recall a time where one of my friends liked this guy, but he didn’t understand what “taking it slow” meant. That relationship never even got to happen.

Andrea: I guess the only way to really think about a relationship in our current situation would be to think about the future in short terms.  I mean, we’re only here for four years (well, for me, one more . . . and you three more.) and that’s not a lot of time.  You have to stay in the present, otherwise you won’t enjoy the happiness / amazingness you have.

Rising blogger: Meet Keisha Farrales Empowering others to be the best version of themselves

Amanda: That also brings up another downside, though. Unfortunately with the short time high school is, there’s no real guarantee that your relationship will last after you graduate. Don’t get me wrong– I’m not saying you shouldn’t have a relationship in high school or whatever, I’m just saying that if you rush into a relationship and force it to last, it’s gonna be a mess. But hey, if you’re dedicated to that, then go ahead. Have a relationship. Be fun and “coupley.” Surprise your significant other with a giant gift every day. Go for it!

Andrea: If you’re going to be in a relationship, enjoy it. Cherish every single day because it’s probably not going to last. Make that person happy at every opportunity.  Let them know you’re grateful to have them in your life.  If you rush into it, so what? Enjoy every moment.

Amanda: Do all that, but don’t force it and don’t rush it. Forcing things to happen will not be beneficial at all. No one will be happy. Woo hoo. Love is such a wonderful thing!